Aside from the normal things going on this week, we also had a medical evacuation.  Someone needed to be evacuated from a container ship that was passing by.  We've also had a few more Laysan ducks become sick from botulism.  So far we've been able to cure them all with antitoxin and food.  We have to check for sick and dead ducks daily, since botulism can spread through maggots from an infected carcass.
It's the quiet season around here now, until the albatrosses come back in October.  It's quite a bit easier to get around the island now that the birds aren't blocking the roads.  The birds are great, but it's nice to have a little break.  Just like with the seasons, you appreciate the summer a bit more after the winter. 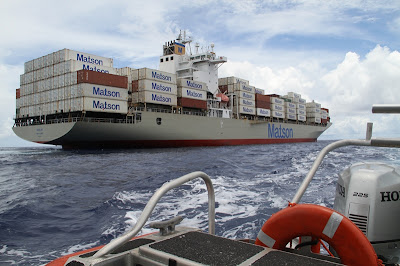 We're pulling away from the ship after picking up the patient.  It was a bit rough, but at least they had steps for the person to get down to our boat. 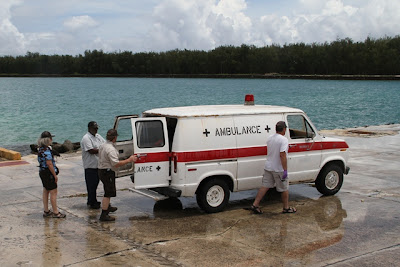 Our fancy state of the art ambulance. 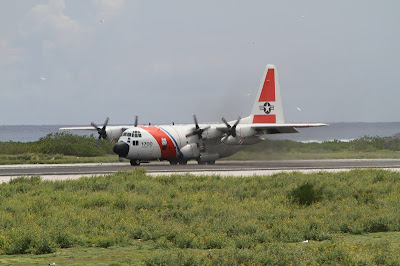 There are few enough birds around now that the planes can land in the daytime.  The Coast Guard was nice enough to bring us a few supplies when they came.

The heat waves coming off of the runway give a kind of cool effect on the photo.  You'll have to double click on the picture to make it bigger to see that. 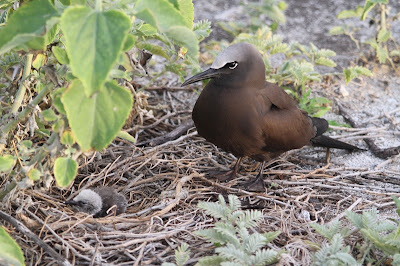 The brown noddy chicks are starting to hatch. 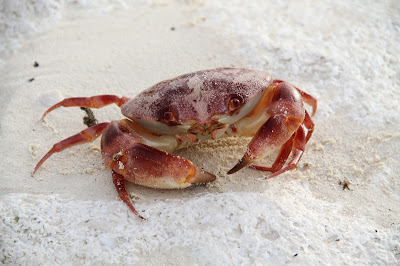 Here's a convex crab I found out on the beach. These usually aren't out on land. 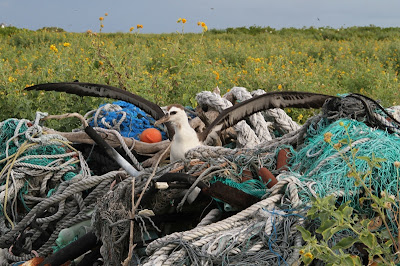 This Laysan albatross climbed up on a pile of marine debris.  Maybe it's climbing out of the verbesina to try to catch the wind. 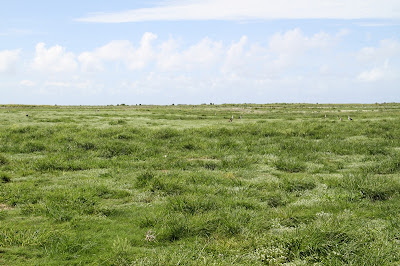 This is the parade field now.  There are only a couple of albatrosses out there. 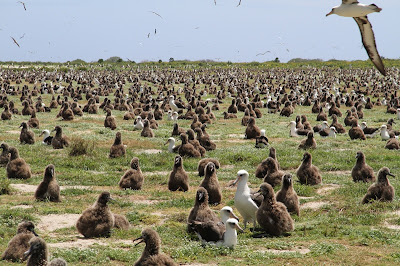 This was from almost the same spot back in April.﻿
Posted by Pete Leary at 2:32 PM 5 comments:

This week we did a little bit of good.  The volunteers did a great job of getting rid of a lot of invasive plants, planting some native ones, finding two ducks sick with botulism (which we rehabilitated with antitoxin and food), and a few random other things.
I've got a few good links for you too. There's a great article about the tsunami, written by one of our vistitors that was here during the tsunami (Connie Toops).  I had a photo of her digging out an albatross back in March, and she put a picture of me with an albatross that I had just dug out.  Here's the link for the article in National Wildlife Magazine:
http://www.nwf.org/news-and-magazines/national-wildlife/birds/archives/2011/seabird-rescue-midway.aspx﻿
Chris Jordan and his crew (Jim & Joe) are back on Midway working on their film about Midway and taking some photos.  Chris is just back from Kenya after winning a prestigious photography award, the "Prix Pictet Commission", which sent him to Kenya to photograph sustainability issues in local Africa populations.  They have a new trailer for the film at http://midwayfilm.com/  I wish I could see it, but our internet is way too slow out here.  From the first 9 seconds of music I can hear, it sounds great!  If you didn't check out their blog site before, that's worth a look too:  http://www.midwayjourney.com/  And the last thing I'll mention is Chris' gallery page.  This is a direct link to his Midway photos, but that is only a small part of his portfolio:  http://www.chrisjordan.com/gallery/midway/#CF000313%2018x24 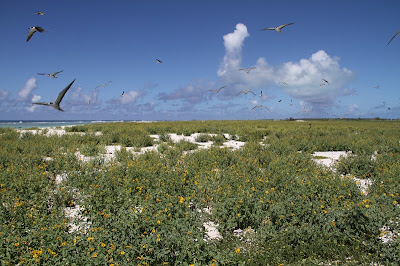 The verbesina is going crazy on Eastern Isalnd after the tsunami spread the seeds around.  It killed all of the live plants, but it looks like it also germinated the seeds.﻿ 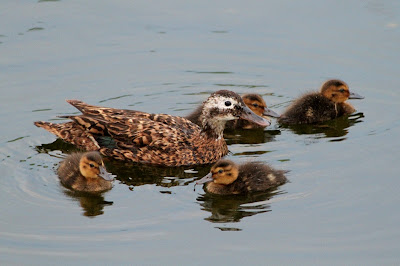 A Laysan duck and her 4 ducklings are swimming in one of the seeps on Eastern Island. 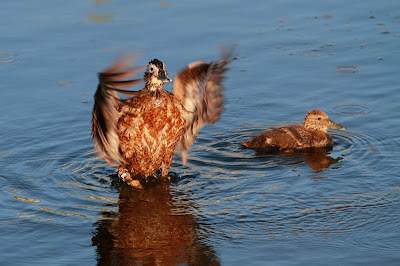 This is another Laysan duck female with 2 ducklings on Eastern Island.  The other one is a bit out of frame. 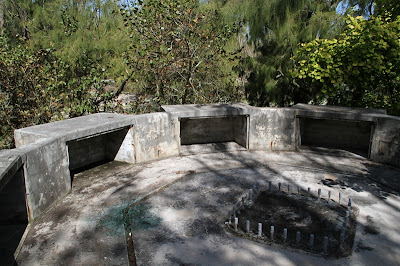 Here's a photo for those who like to see some of the historical things.  This is the old gun emplacement next to the cemetery. 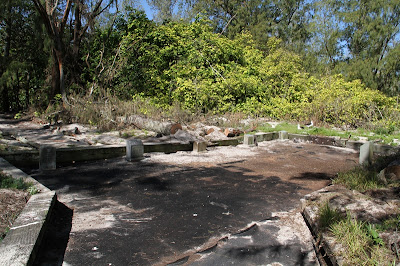 ﻿This is the cemetery.  Most of the graves are for doctors who died on Midway.  What I was told is that the doctors would normally be the ones who embalmed any bodies or those who died, but if the doctor died, no one was around to embalm them, so they were buried here.  The gun emplacement in the previous photo is just in back of the shrubs behind the cemetery.
Posted by Pete Leary at 10:02 PM 4 comments:

Another Blog to Check

There was nothing big going on at Midway lately.  Just the usual warm, sunny days.  It's been a bit breezy, so a lot of the albatross chicks have fledged, but there are quite a few around.  We've been doing are usual weekly checks of albatross plots, red-tailed tropicbird plots, and Laysan duck surveys.  While I was over on Eastern Island, I found some pits that a female green sea turtle had dug.  These didn't look like actual nests, but just pits to check out the sand.  We've only had a few verified nests on Midway so we're always hoping to find more.
I forgot to mention that the coral reef researchers from UCSC (Univ. of California Santa Cruz) came out here while I was gone.  Kristin and Anne have been coming out here every summer for a few years now.  Kristin has been studying black-lipped pearl oysters.  They aren't very comon around here, but she's finding a few.  She also does a blog from here that you can check out for a slightly different Midway perspective.  Here's the link and a link to their research, too:
﻿http://midwaycoralreef.blogspot.com/
http://bio.research.ucsc.edu/people/potts/midway/
The sooty terns are still nesting over on Eastern Island and still flock around when people walk there.

Some of the sooty tern chicks are starting to get feathers.  A lot of the birds are still on eggs.

This is the caterpillar of the white-lined sphinx moth feeding on the native Boerhavia repens.

This is the adult white-lined sphinx moth.  Since the boerhavia is doing so well, there are a lot of these moths right now.

This is a frigatebird flying above a dead heliotrope tree.
Posted by Pete Leary at 7:50 PM No comments:

It stopped raining for the most part and we've had some pretty nice days out here.  It was a short week with the holiday and 3 days of HAZWOPER (Hazardous Waste Operations and Emergency Response) training for me. We also had a couple of visitors this week.  We had an atmospheric research plane stop by to refuel and rest for a day, and we had a couple stop in who's sailboat got hit by lightning and had some fried electronics.  Other than that, it was a normal week of watching the albatross chicks try to fly, counting Laysan ducks, getting rid of invasive plants, and planting native ones.
Here's the Bint Al Khaseem, who was passing by during a pretty high energy weather cell.  The lightning fried some of their gear so they pulled in to make some repairs.


This is the G5 (our plane is a Gulfstream 2 (G2)) doing atmospheric research.﻿  It's nice that Midway has an airfield to support things like this.
Here's a canary on one of our hibiscus trees, on a nice healthy flower.

Here are the emerald beetles killing another hibiscus flower by going after the nectar at the base of the flower.  The emerald beetles are a really bad fruit and flower pest that are very invasive so we are pretty careful to keep them out of Hawaii.

﻿An endangered Hawaiian coot flew in from the main Hawaiian Islands most likely.  It seems to be happy sitting in the ballfield seep.
This albatross chick has a pretty nice spot in the shade out on my back patio.
Posted by Pete Leary at 8:10 PM 5 comments:

Happy 4th of July!  It's been a while but I'm back from vacation.  I had a nice break, but Ive got a lot of catching up to do.  Things are as usual here, but a little rainy for this time of year.  The albatrosses are fledging.  As you saw from my last post, I missed a little bit of excitement with the short-tailed albatross fledging and the 747 emergency landing, so now I just have the usual excitement, like doing biology and holidays.  We have a nice Hawaiian group out here that is collecting albatross feathers to make Kahilis (a royal Hawaiian staff that is covered in feathers, you can google it to see what they look like).  They are collecting the feathers from dead birds since they need thousands of them.  I didn't take too many pictures in the few days since I've been back, due to the rain, but here are a few.
Captain Brooks' Tavern is decorated for the 4th.  We actually celebrated on the 2nd, since it was supposed to be the best weather.

A few people wanted to stay out under the tarp instead of coming inside. ????????

﻿A white tern chick hatched in my backyard on Friday.
Here are a few pictures of the young albatrosses getting ready to fledge.


I'll probably get a few more pics before they are all gone (in another month or so).
Posted by Pete Leary at 8:48 PM 2 comments: