Ok, I think that was my last vacation for the year.  It wasn't much of a vacation in Virginia.  I had to help Dasha move from our apartment to a house and just in time for Hurricane Irene.  It wasn't too bad in Alexandria, but our power went out, and the sump pump didn't work so we had to scoop out hundreds of gallons of water from the basement by hand.  Luckily, the power came back on just as it was about to overflow onto the floor.  At least I had a great vacation in the Czech Republic and Slovakia.  I've included a few photos from there too.
A lot has been going on here while I was gone.  The Kahana brought our supplies and the US Coast Guard ship Kukui came to do some work here and at Kure Atoll.  We also had a Coast Guard C-130 come about an hour after our plane came to pick up some of the Coast Guard personnel and a construction crew from Kure.  I've made it through a few hundred emails already and should be caught up in only another week or two, so if anyone reading this is expecting a reply from me, I'll probably be getting to it soon.  Alright, time for some photos. 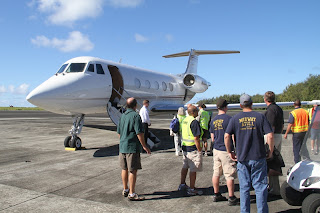 I got to ride out on the new airplane.  Our flight contractor got a G-IIB.  It's almost the same as the last plane, but a little more headroom and the seating setup is a bit better. 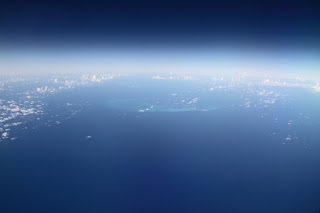 This plane flies a lot higher than the old G-I.  You can barely see French Frigate Shoals in this picture.  It's fairly small from 45,000 feet.  You can see that the atmosphere is pretty thin up there too.  You can maybe see it a bit better if you double click on the photo. 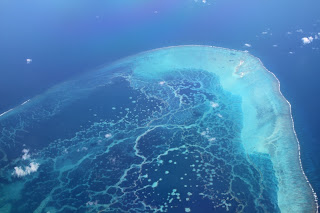 This is part of Pearl & Hermes Atoll.  The reef pattern is pretty cool.  We didn't see Laysan or Lisianski this time, but we did see Nihoa, FFS, Gardner Pinnacles, and P&H.  I didn't get clear photos of Nihoa and Gardner due to the double windows on the plane. 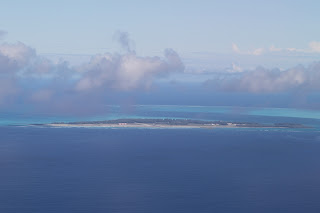 There isn't much to see here, but this is Sand Island at Midway as we are getting ready to land.  It is pretty small, isn't it?

Now for some vacation photos.  Of course, I took a couple thousand, so here are just a few representative shots. 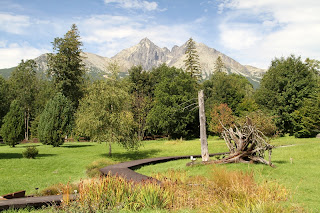 These mountains are called the High Tatras in northern Slovakia.  We spent a week there. 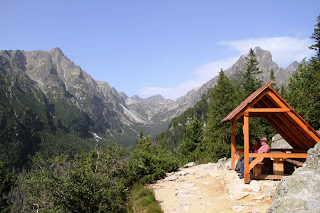 The hiking was wonderful.  It was really surprising how many people were up there, but I can see why because it is really beautiful. 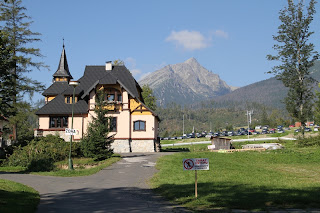 The mountain in the background is called Lomnicky stit. It looks a lot higher than 8,643 ft (2634 m), but the level of the surrounding land is not as high as it is in the Rocky Mountains.  There is a little gondola lift to the top. 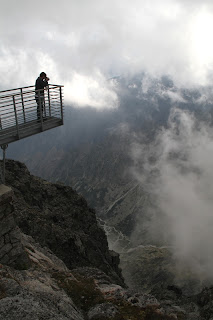 This is my brother-in-law, Tomas, taking a photo from the overlook on top of Lomnicky stit.  It's a pretty long drop from there.  It was clear down below, but there were some clouds up there the day we went.  It snowed up there 4 days later. 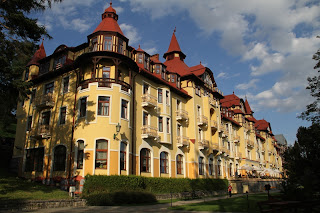 This was our hotel for the week, the Grand Hotel Praha. 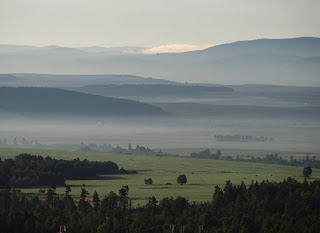 This was the view from our hotel room. 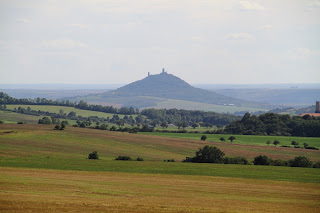 One interesting thing about the Czech Republic is how many of the hilltops have castles on them.  This castle is called Hazmburg. 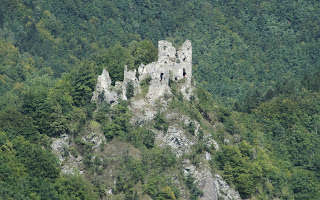 I'm not sure of the story behind these castle ruins, but it was probably nice five or six hundred years ago. 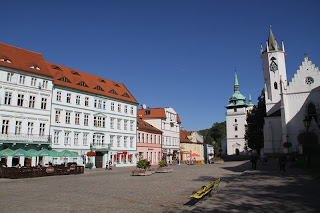 This is the old town square in Dasha's hometown of Teplice.  There are some hot springs here that were said to be discovered in 762 A.D. Beethoven worked on some of his symphonies here while getting treatment in the spa. 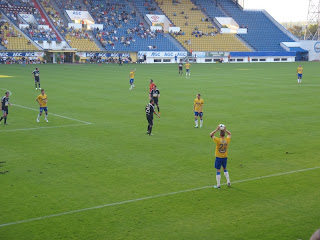 I of course had to go check out a soccer game in Teplice.  The stadium may look familiar if you saw the last "Pink Panther" movie.  I sat in the hooligan section for the first half, but moved for a better seat in the second half.  When you go with the rough crowd, you have to stand the whole time, and it's not quite the same when you don't understand the Czech taunts.
Posted by Pete Leary at 9:06 PM 3 comments: