We lost our extra volunteers this week.  They went back to Honolulu on Thursday along with two of our long term volunteers, David and Eryn.  They got a lot of native plants planted and weeds pulled.  We did get a new group in and it was nice of Amelia to stay to help train Anthony, Eamon, and Dani.  They've had to learn quickly about botulism and Laysan ducks.  We've had a few sick ones this week.  ﻿
I'll be flying out on the next plane, and coming back 3 1/2 weeks later.  I've had a lot of leave time to burn up this year thanks to spending 9 1/2 months on Tern Island last year.  I'll try to do a blog when I get back, or maybe I can do an entry while I'm in the Czech Republic. 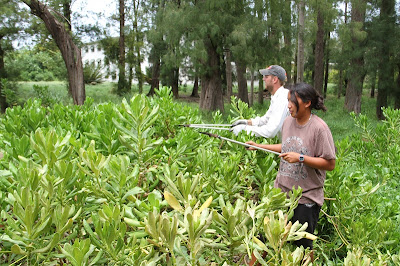 Tyler and Nikki are cutting back some of the naupaka in front of the FWS office.﻿ 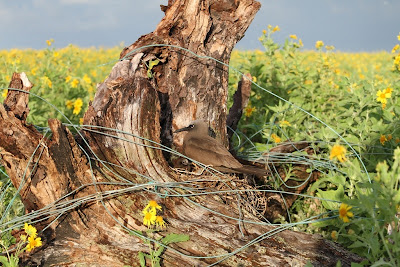 There is a lot of grounding wire all over Eastern Island.  This brown noddy and chick don't seem to mind. 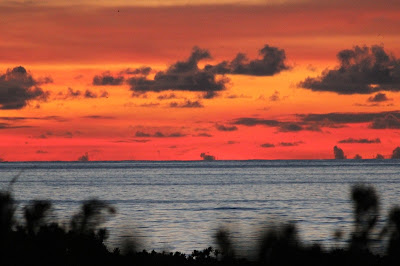 I haven't had a sunset picture for a while, and the colors were nice the other evening, so here is one. 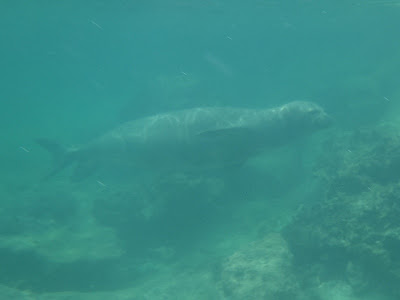 The water was pretty cloudy out near the reef last week.  You can barely see the monk seal in this picture. 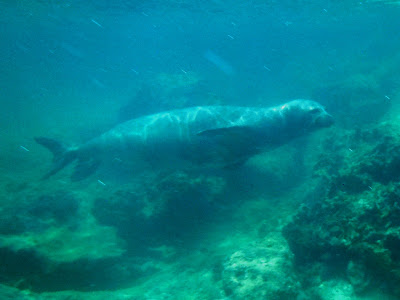 If I mess with the brightness and contrast, you can see it a little better. 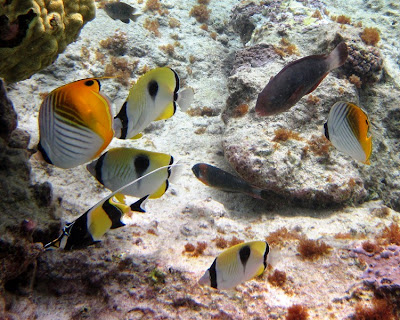 The water was a lot clearer 2 weeks ago when I took this picture of some teardrop butterflyfish, threadfin butterflyfish, a moorish idol, a saddle wrasse, and a female spectacled parrotfish.﻿
Posted by Pete Leary at 10:12 PM 4 comments:

We had another ship this week.  The NOAA ship "Oscar Elton Sette" came through on their way to pick up the monk seal crews from the other islands.  They usually stay over night to give the crew a break, but this time they were only here for the day on Friday.  A few of the people from the ship are flying out on our next plane, so they will help us out on the island until Thursday.  Julia, Nicky, Naomi, and Ilana were on Kure Atoll.  Nicky was a volunteer here a few months ago, so it's nice to have her back for a few days.  Irene and Tyler were the turtle techs at French Frigate Shoals this summer.  They counted and marked over 800 nesting females this year which was the most ever recorded since they started the program a few decades ago.  I worked with Irene a couple of years ago, so I think I may have a photo or two of her on my Tern Island blog.
I went out snorkeling again today, with our new visitors.  We were going to take the boat out, but the weather wasn't so great, so we just went out from shore.  There isn't much coral at all, but there are still some good fish to see.  My photos from last week are better so I'll show you those, instead of the not so great ones I got today. 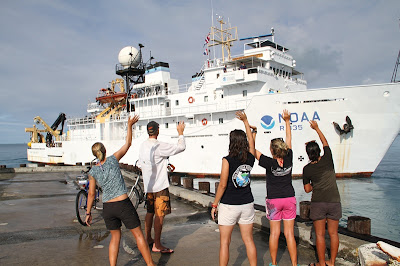 Our new helpers are waving goodbye to the Sette.  This is Naomi, Tyler, Irene, Ilana, and Nicky. 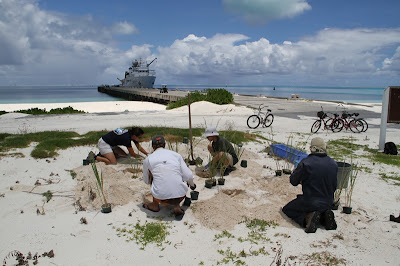 Irene, Tyler, David, and Greg are planting bunchgrass near the cargo pier with the Sette in the background. 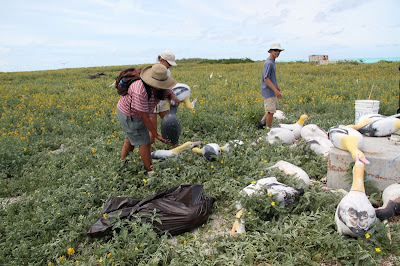 Amelia, Eryn, and David are collecting some short-tailed albatross decoys that we'll be cleaning up. 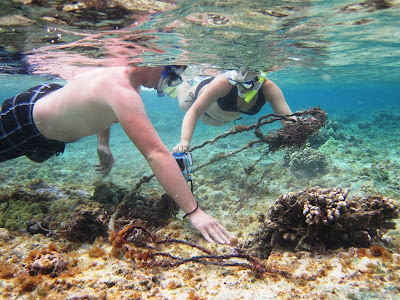 Here are some of last weeks pictures.  Derek and Kristin are picking up some net and rope stuck on some coral.  Derek is working on a water tank painting project on island. 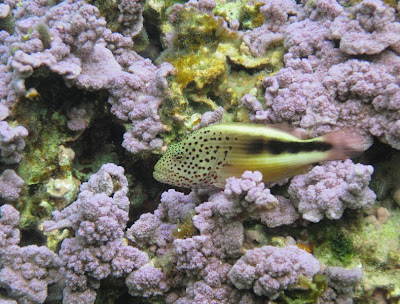 This is a Blackside hawkfish in some nice purple coral. 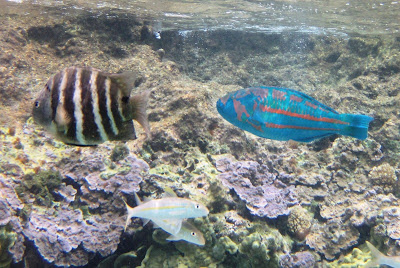 This is a Blackspot sergeant and a Surge wrasse. 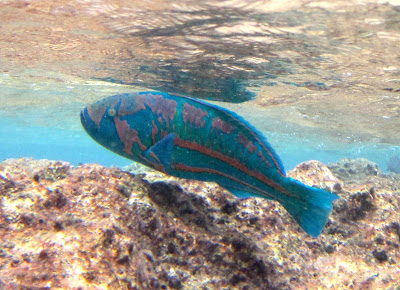 This is a little closer view of the surge wrasse.  They are a bit more colorful than the photo shows. 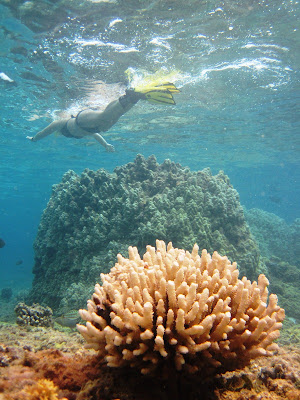 This is Kristin swimming above some nice coral.
Posted by Pete Leary at 9:22 PM 4 comments:

We had some visitors this weekend.  The NOAA ship Hi'ialakai was in the neighborhood doing coral reef studies, so they pulled up to the pier Friday and left today.  It was nice to have them here and hear what they are working on.
We had a couple more sick Laysan ducks with botulism this week.  But we got them all fixed up and back out in the field.
I don't have a lot more to tell you this week since I spent most of the time in the office.  Don't feel too sorry for me, because I at least got out snorkeling today and got a few pictures (Thanks for the camera loan, Kristin!) 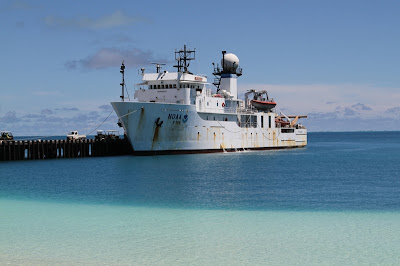 The Hi'ialakai brought beautiful weather with them when the pulled up to the cargo pier. 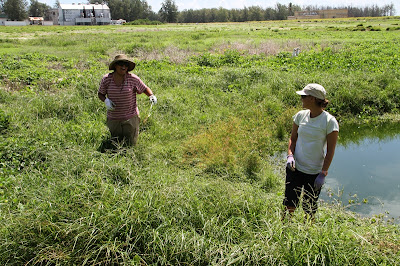 Here are two of our volunteers, Amelia and Eryn, pulling out weeds near the Parade Field seep so we can locate sick or dead Laysan ducks. 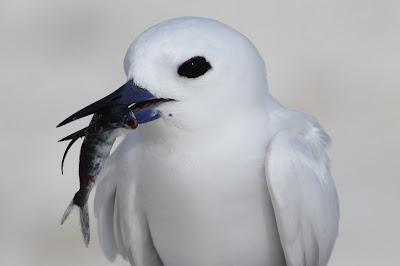 This white tern is waiting to feed this fish to its chick. 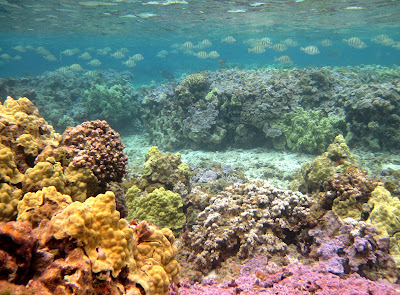 Now for some snorkeling pictures.  This is the reef on the east side of the atoll.  There is some really nice coral over there. 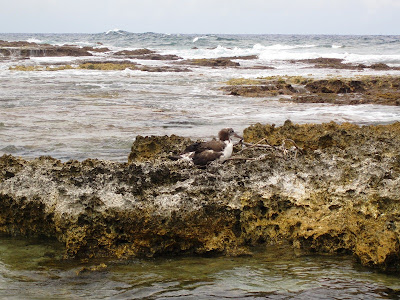 This is the emergent reef on the east side.  This looks volcanic, but is actually just long dead coral.  A few of the albatross chicks take a rest on the reef before they fly off for a few years. 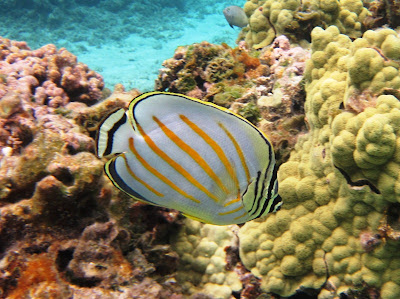 I got a lot of good pictures with Kristin's camera today, but I'll just show you some of the butterflyfish that we have around here.  This is an ornate butterflyfish. 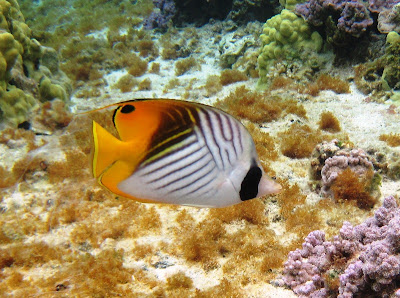 This is a threadfin Butterflyfish.  You can see the "threadfin" near the black spot above the caudal fin (tail). 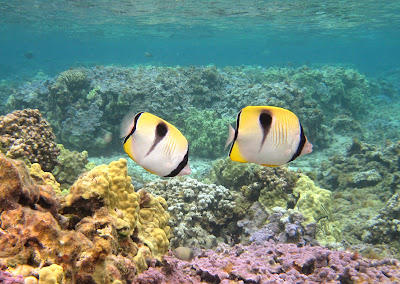 These are teardrop butterflyfish.  There were a lot of them around, but I hadn't seen them at Midway before. 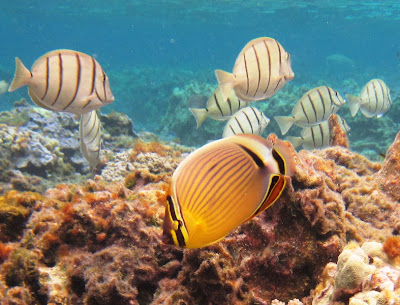 Here's an oval butterflyfish, with some convict tangs in the back.  Both of these species are fairly common around here. 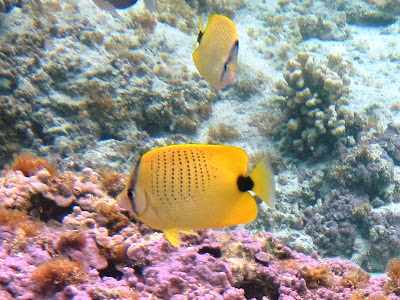 These are milletseed butterflyfish.  I saw some other species of butterflyfish, but didn't get great pictures of them.  Next week I'll show a few more random underwater shots.
Posted by Pete Leary at 10:27 PM 6 comments: