I forgot to mention something a few weeks ago, since the news happened the night that I left for Honolulu.  We have a new manager at Midway Atoll National Wildlife Refuge.  Dan Clark will be in charge out here, and his wife is able to join him.  I worked with Dan and Kathy a couple of years ago when he came out on a work detail.   We are happy to have them.
The wind finally slowed down for a few days, so we got a chance to go survey the reef.  We like to check things out to make sure nothing is amiss out there, so I'll have a few photos other than birds this week.  Don't despair, birders, I'll still put up a couple of bird pics. 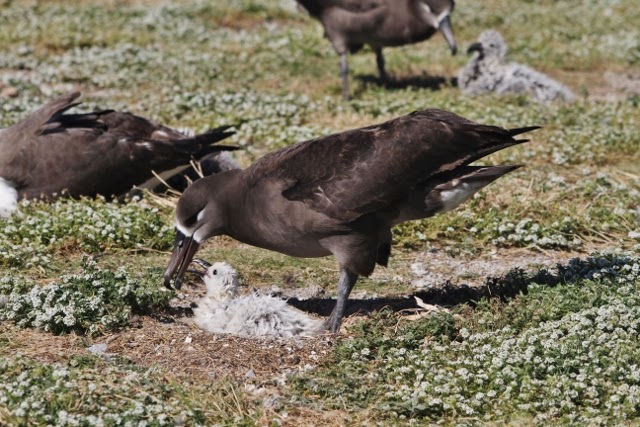 Here is a Black-footed albatross chick asking for food. 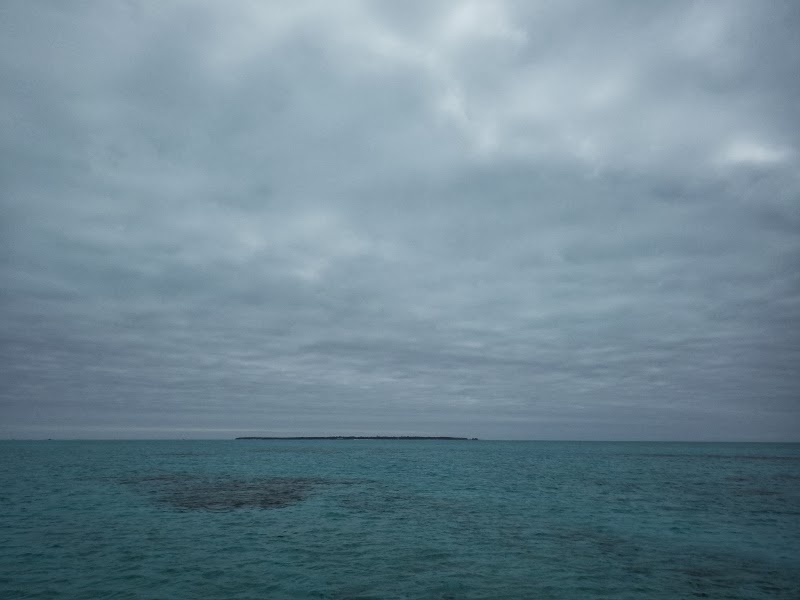 That little dark line on the horizon is Sand Island (where we live) from the very northern tip of the atoll.  It would be even harder to see if it wasn't covered with ironwood trees.  It was sunny for the early afternoon, but got cloudy later on.  More fish come out of their hiding spots when it's cloudy, so it's not that bad. 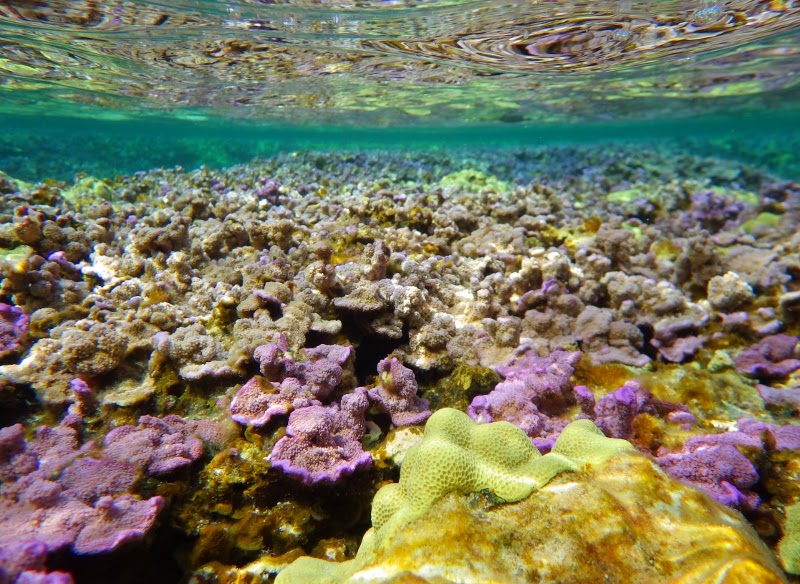 This coral is growing very close to the ocean surface.  The water is only about 6 inches deep here.  It's too shallow to snorkel, but there are channels that are deeper that we can swim through. 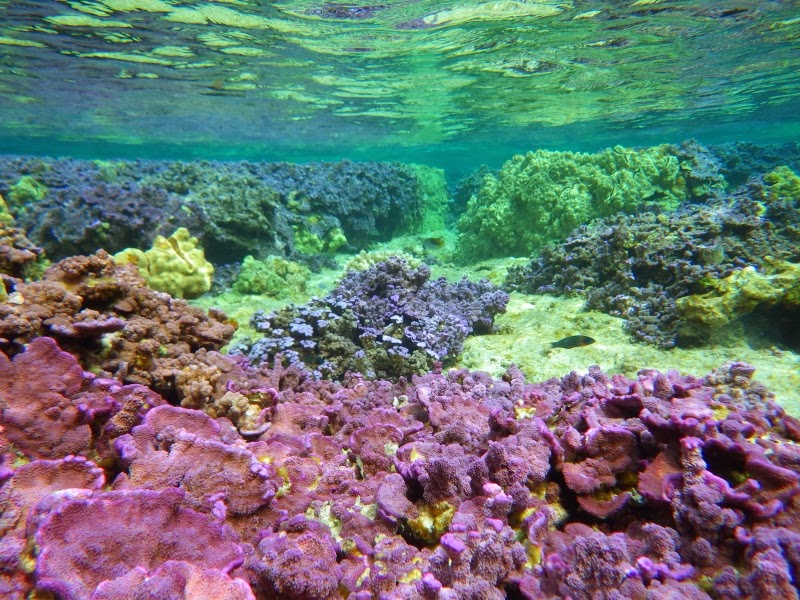 The coral in this area is beautiful and healthy.  One of the benefits of the cold winter water is that it is much clearer for photos than in the summer when it's warm.  There is a lot less micro sea life growing in it now.  A wetsuit is a must for most people. 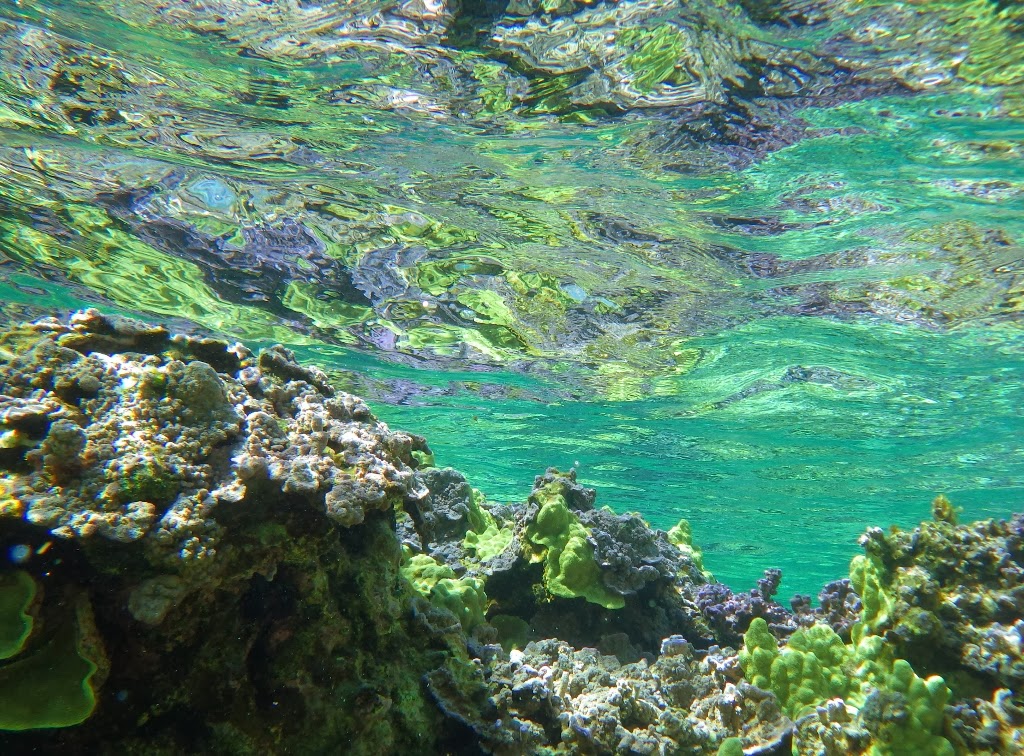 The reflection of the coral on the surface gives a really cool effect. 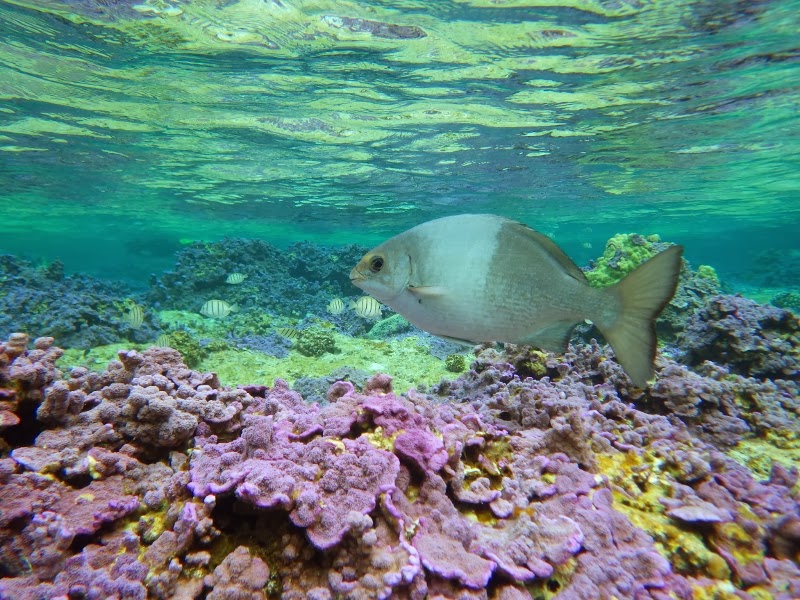 Here is a nenue swimming by.  There are a few convict tangs in the background. 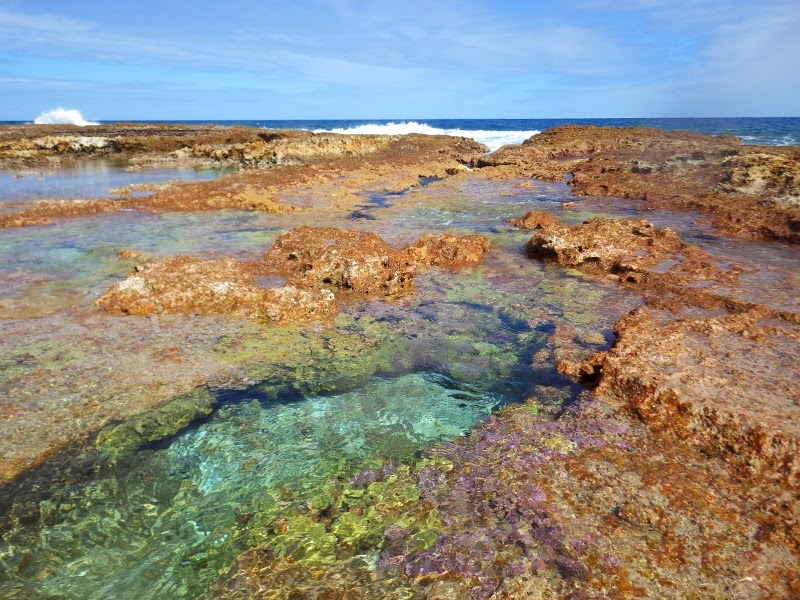 There are some nice tide pools on the emergent reef. 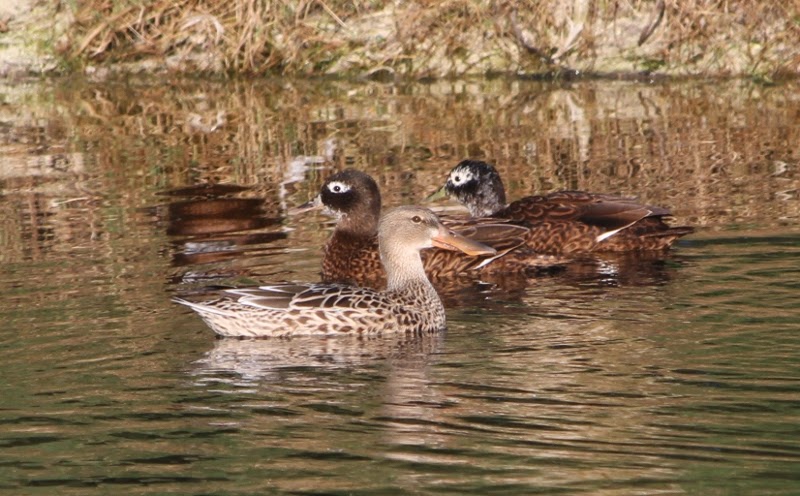 This obviously is the other bird photo.  It's a Northern shoveler with 2 Laysan ducks.

There wasn't a lot going on last week so I'll make small talk about the weather.  Once again it's been pretty chilly for Midway.  The temps have still been in the high 50's and there's been quite a bit of wind, so everyone is wearing their winter gear out here.  The chicks are getting bigger and most don't seem to be bothered by the cool weather, except the really small ones.  I only took a few photos this week and most were on Eastern Island, so here are a few of the birds over there. 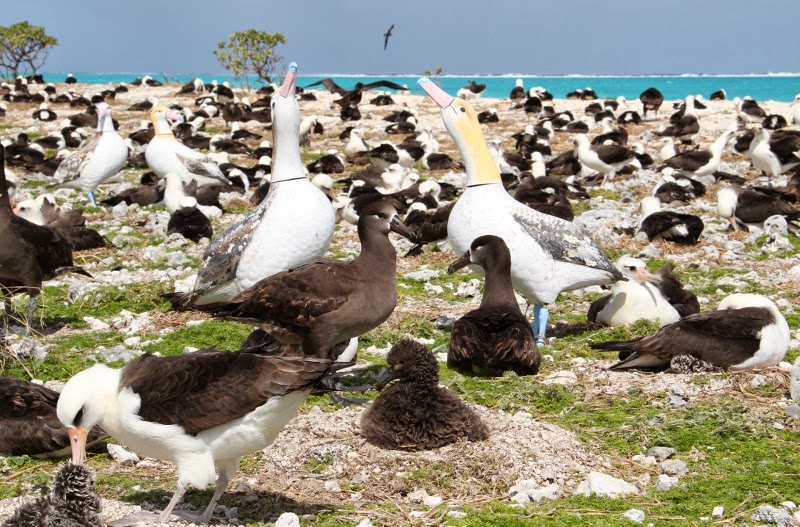 The Short-tailed albatross chick is getting big.  It's about 6 weeks old now. 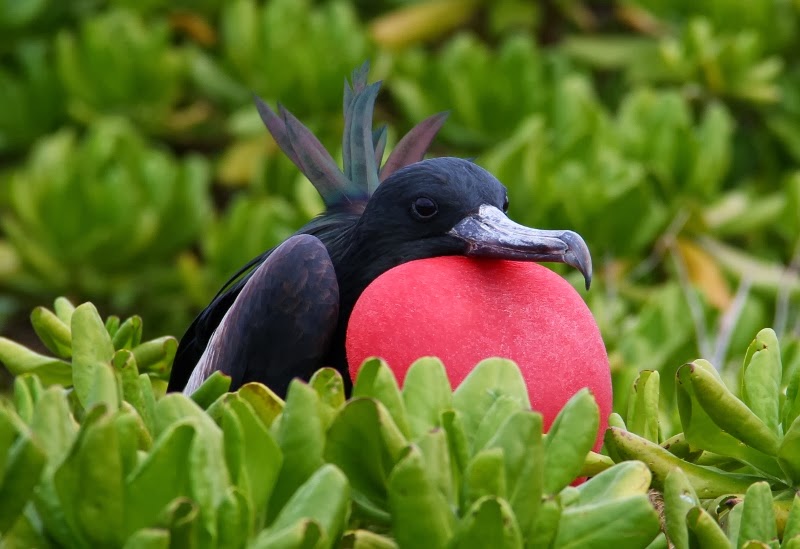 The Great frigatebirds are starting their displays for nesting season on Eastern Island.  They don't nest on Sand Island. 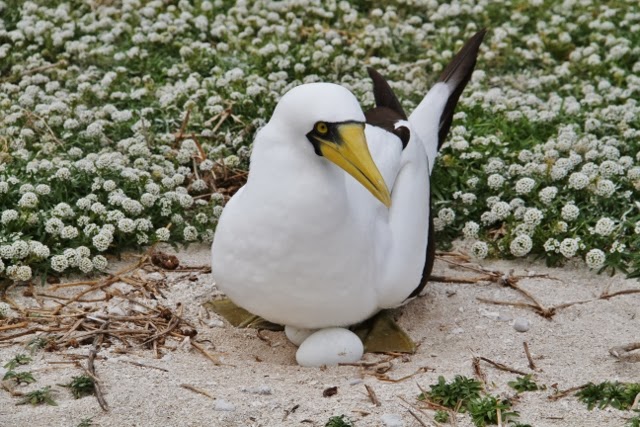 The Masked Boobies also don't nest on Sand Island.  I only saw one nest over there this week. 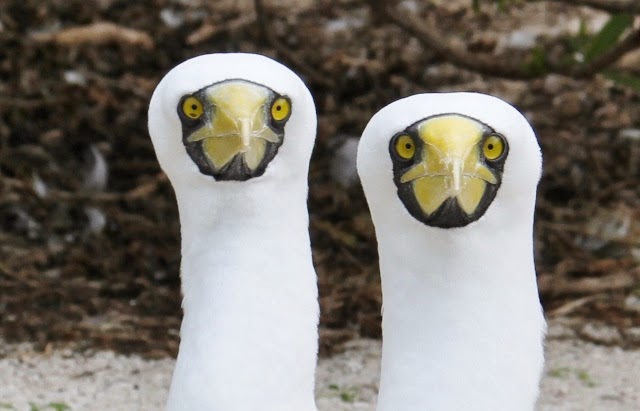 This pair may be getting ready to have a nest sometime soon.
Posted by Pete Leary at 4:38 PM 5 comments:

It's nice to be back on Midway, after my 2 weeks working in Honolulu.  The big news is that Wisdom has another chick.  For those who don't know who Wisdom is, she's the oldest known wild bird, and is at least 63 years old, banded as an adult in 1956.  She still looking about the same as always.

The Short-tailed albatross chick is old enough to be left on its own now.  The parents don't leave for long when the chick is young, so they are feeding it frequently.  It has been very cool, windy, and a bit rainy for the past month or so, so the other albatross parents are aren't leaving them alone much yet. 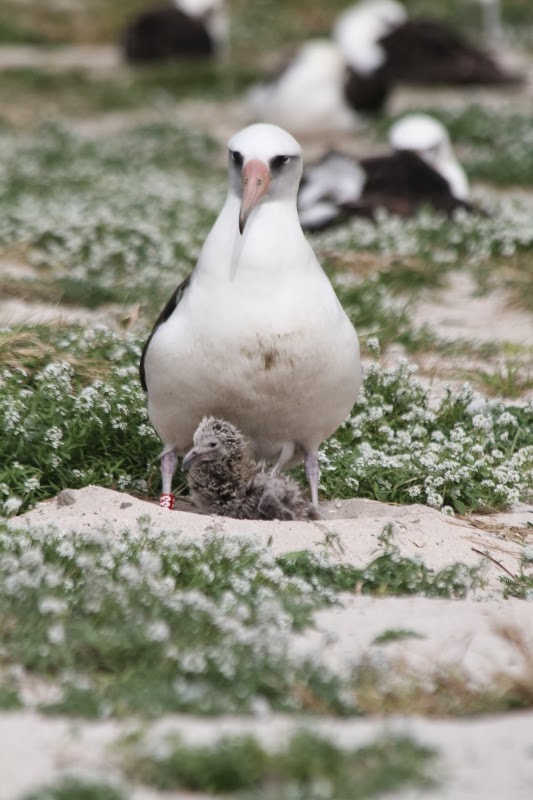 This is Wisdom and her chick.  You can see a bit of Wisdom's red leg band on her right leg. 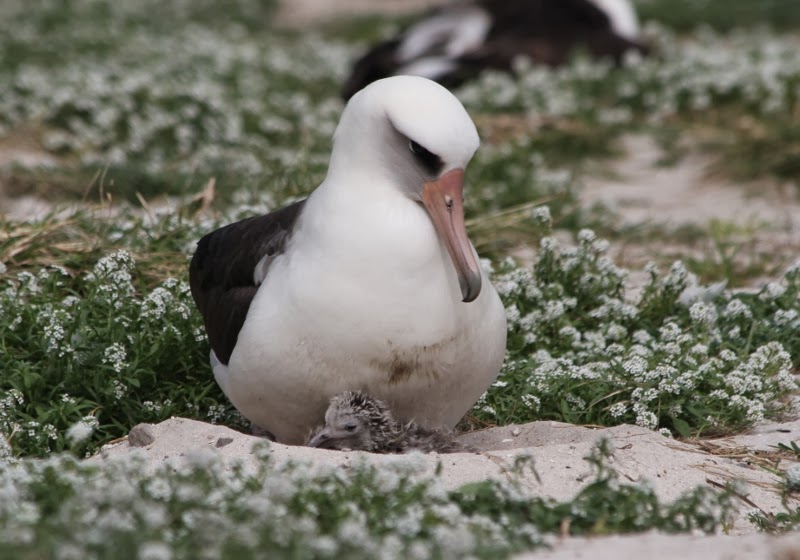 Here's another photo of Wisdom and her chick. 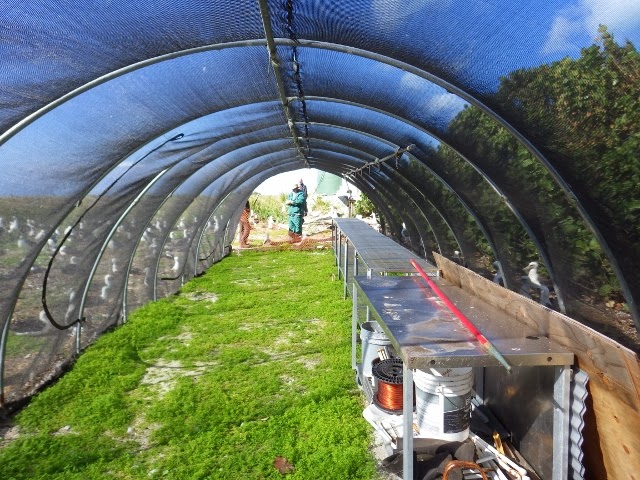 This is the greenhouse over on Eastern Island.  It was originally built as a temporary Laysan duck home when they were first translocated from Laysan Island.  The greenhouse is empty right now because the weather has been so bad that the crew hasn't been able to spend much time over there. 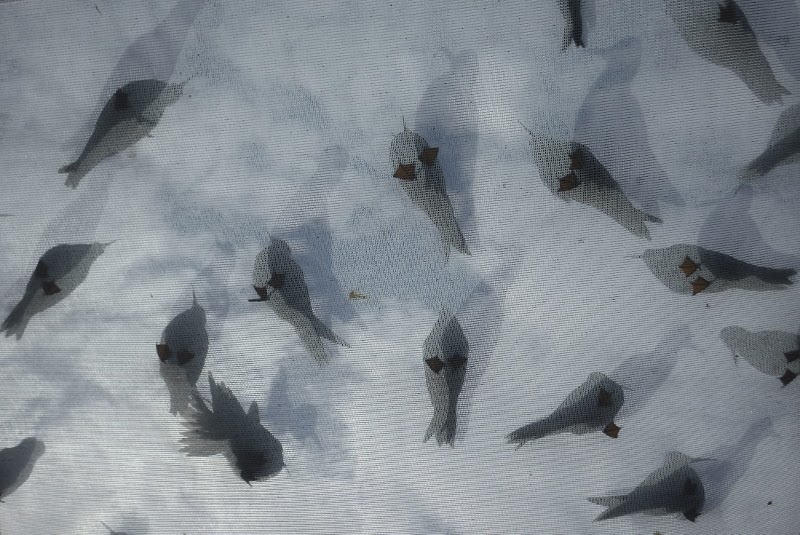 Here are some Black noddies on the roof of the hydroponics garden.  I don't go in there too much, but we had a tour for some folks from the regional USFWS office out here on a site visit. 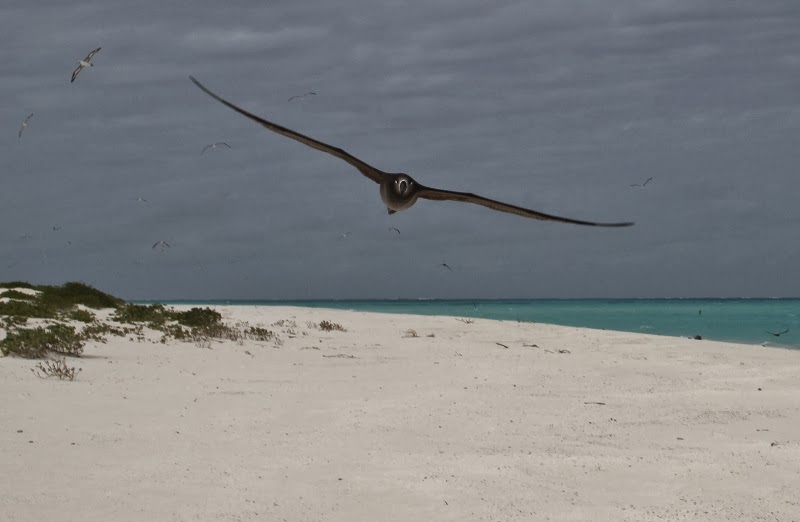 It wasn't the best day for hanging out on the beach, but it was OK for taking albatross pictures. 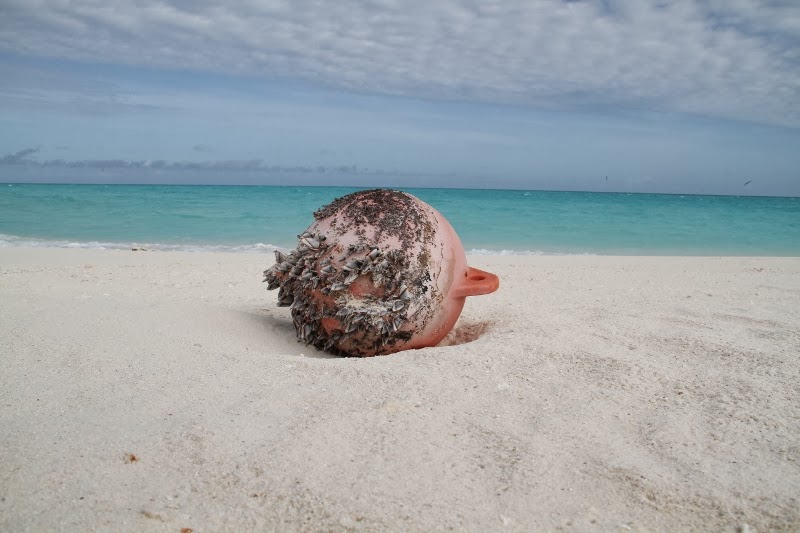 A lot of marine debris has washed up on the beaches in the last month due to the wind.  This fishing float has quite a few barnacles growing on it. 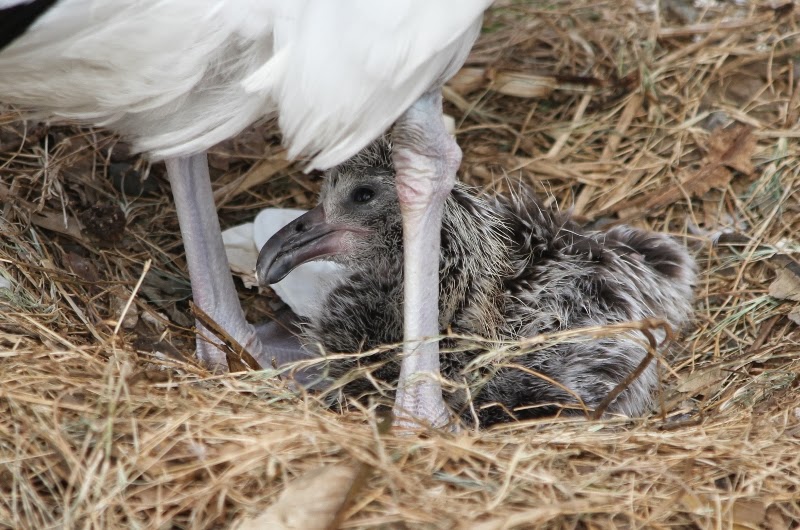 Most of the chicks are hatched now, but this in one of the later ones that is only one day old. 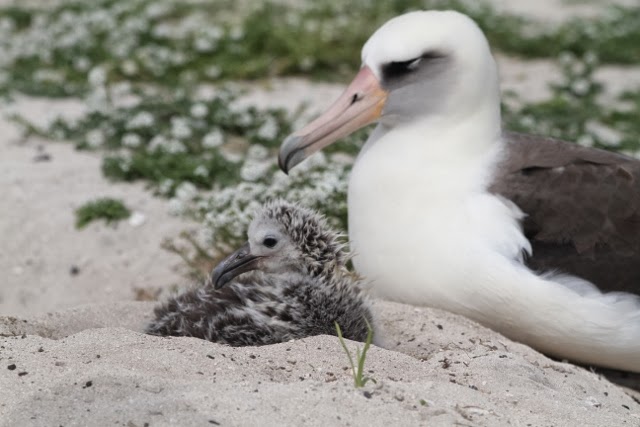 This chick isn't quite ready to be left on its own, but the parent is giving it a little space.
Posted by Pete Leary at 5:21 PM 6 comments: