﻿
It was another beautiful week.  A few days of rain for the native plants, and a bit of sun to finish off the week and some nice flat water for the boat.  There are a lot of eggs hatching this time of year, so I'll put up a couple of chick pictures.
I'm going to be off island for a few weeks again and won't be posting anything, but I'll be back in mid-July to post more pictures for you.   ﻿ 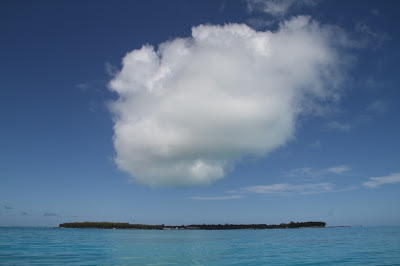 This is a view of Sand Island from the boat (the island we live on).  It's not very big, is it?  It's about 2 miles across from this view. 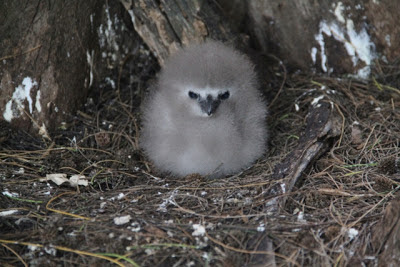 This Red-tailed tropicbird chick lives right behind the office. ﻿ 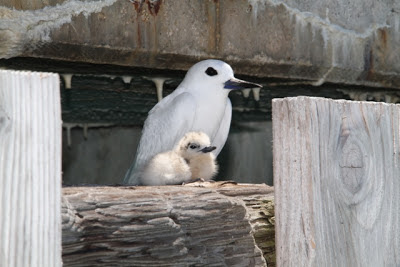 This White tern chick on the Eastern Island pier hatched a couple of days ago.  Most of the time, the chicks on the pier are too exposed and don't make it.﻿ 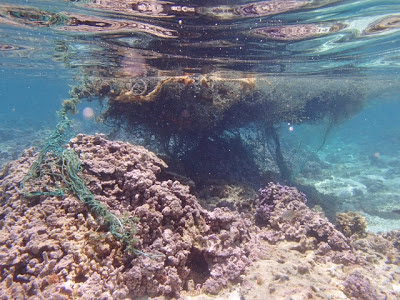 A fishing net washed into the atoll and got stuck on the coral.  I'll go back this week and get it before a seal or turtle gets stuck in it.  There's too much coral to get the boat in there, so I'll have to bring the kayak to float it out.﻿ 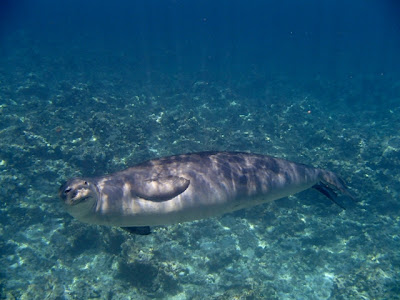 A Hawaiian monk seal was checking us out while we were snorkeling.﻿ 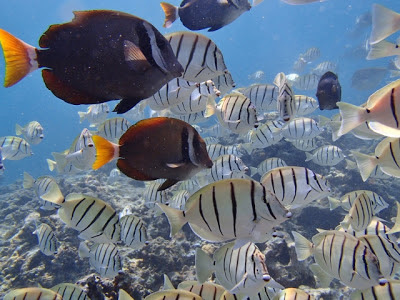 It's always easier to get fish pictures when it's calm.  You don't scare them away as much by kicking.  These are whitebar surgeonfish and convict tangs.﻿ 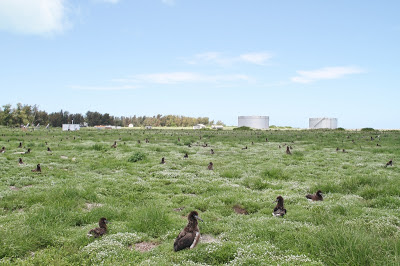 The grass is starting to grow all over the island now that the adult albatrosses aren't around to keep it stomped down.  This is the old fuel farm.﻿ 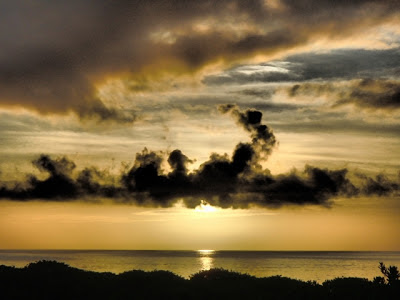 Another shot using the "Dramatic" setting on my Olympus underwater camera.﻿

71st Anniversary of the Battle of Midway

It was the 71st Anniversary of the Battle of Midway this year.  We didn't have anyone fly in for this one, but we have really only had big ceremonies on the 5 year marks.  We had most of the island population out, as we did the week before on Memorial Day.  There wasn't that much else going on this week.  Without volunteers and visitors, all we do is work, and I try not to get too detailed about that.  Just the interesting stuff. 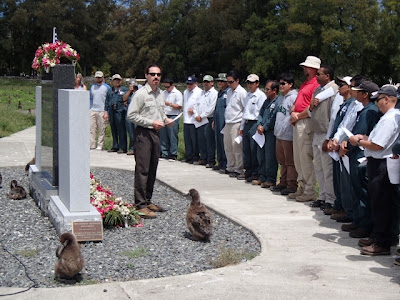 John Klavitter says a few words at the Battle of Midway Memorial on June 4.﻿ 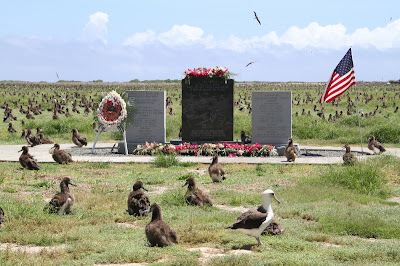 Sam made a few more flower arrangements for the memorial. 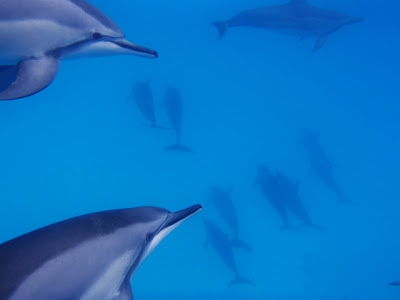 I've been seeing the Hawaiian Spinner Dolphins quite a bit lately on the trips to and from Eastern Island. 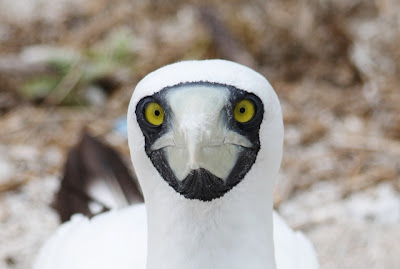 This Masked booby was sitting on a nest on Eastern Island.  There are only about 2 or 3 nests a year at Midway. 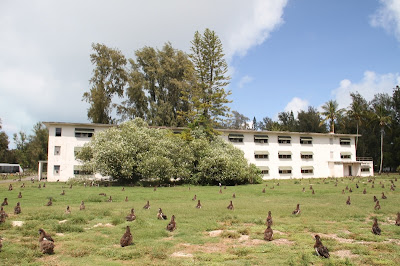 Another building shot.  This is the old Delta Barracks by the dining facility. 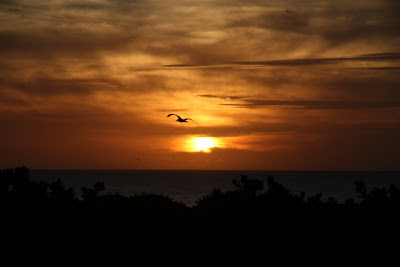 It's been cloudy a lot lately, so the sunsets over North Beach are nice when the clouds break a little.
Posted by Pete Leary at 4:16 PM 6 comments:

We had a nice Memorial Day Ceremony with most of the island population.  We'll have another ceremony for the Battle of Midway on June 4th.  There are no visitors coming out this year, so we'll just have island people again.  I know that the Navy is going to be having a commemoration at the Navy Memorial in Washington D.C. this week. 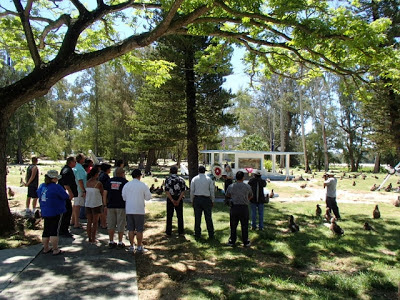 Believe it or not, this is most of the island population right now.﻿ 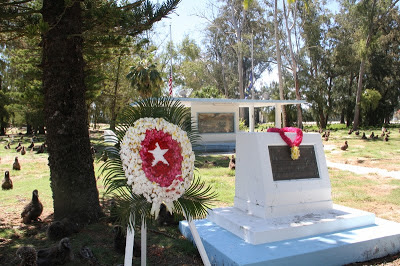 One of the Thai employees, Sam, made this flower display and lei. 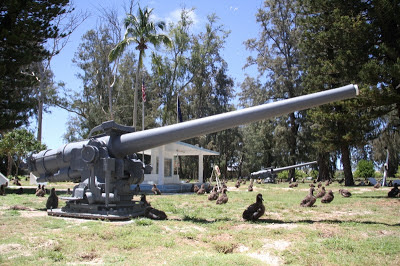 These are 5 inch guns that are at the memorial.﻿ 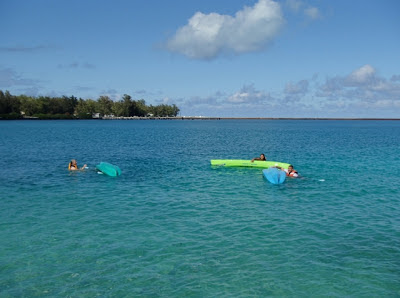 I gave kayak training to a few people who haven't had it yet.  Penny, Liz, and Darren are flipping the kayaks to make sure they can get back in before they go out on their own.﻿ 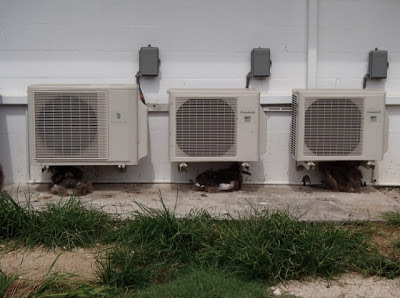 The albatross chicks like the new air conditioning units at my house.﻿ 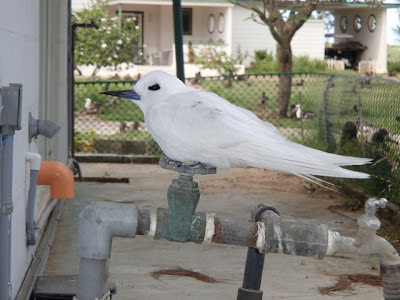 This White tern found an interesting spot for an egg.  Ric and Tim won't be able to use their hose for a couple of months.﻿