We've been getting a lot of wind and rain for the past week, and it's supposed to continue through this week too.  I'm not complaining.  At least it's in the 60's, although with people in winter coats and wool hats, you wouldn't guess that.

We had a group come to the island for a couple of days this week.  People on the Monument Management Board (USFWS, NOAA, and the State of Hawaii) were able to visit.  We always like to have people who are involved in management decisions come out and are able to see what it's like out here.  Most of them end up saying, "I knew there were a lot of birds here, but I didn't expect this many". 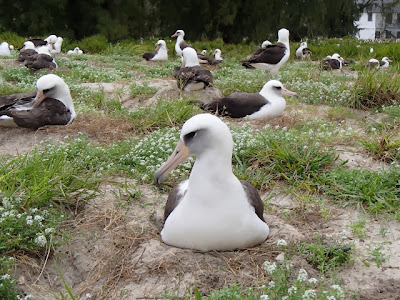 Wisdom's mate is now back on the nest.  She's out filling up with food after laying that big egg. 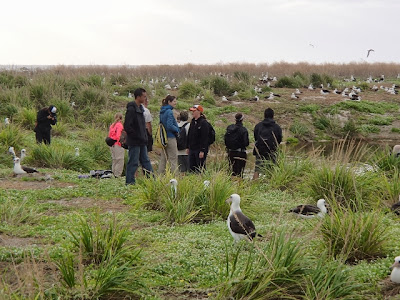 The MMB group is getting a tour of Eastern Island.  That brown stuff on the horizon is all of the dead verbesina that was recently sprayed. 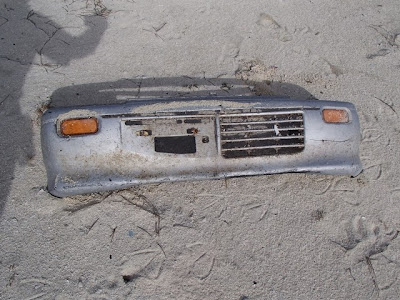 Is anyone missing their front bumper cover? 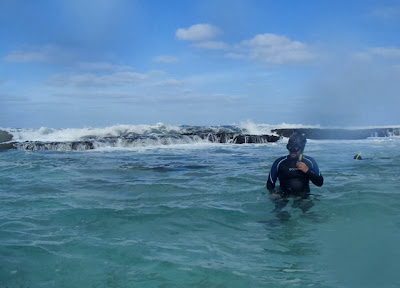 We took the group out to Reef Hotel for snorkeling.  It was really rough.  You can see a big surge coming over the emergent reef toward Rick. 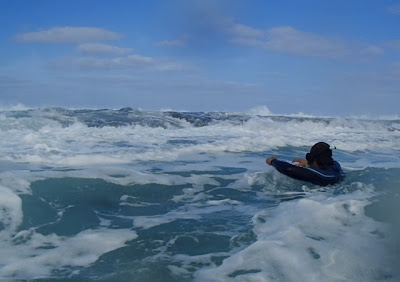 This was the first time I've been out there where water was actually washing over the reef.  Normally it dissipates before it gets there. 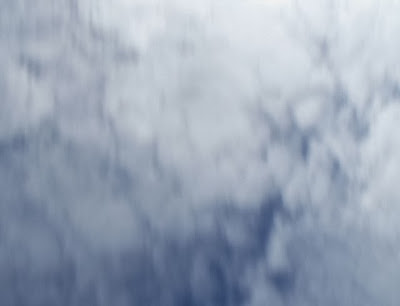 The underwater photos weren't quite as good as usual with all the bubbles. 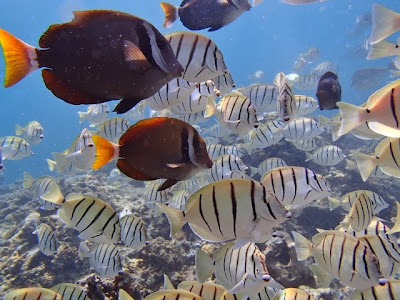 This is what it is supposed to look like (taken in June). 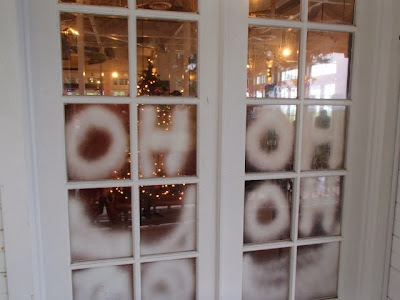 "OH, OH, OH!  The Clipper House Christmas decorations are up. 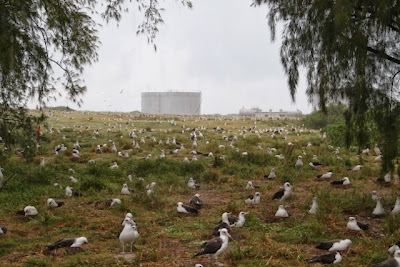 This is the view out the back door of my house.  There was a decent rain, but you can't really tell from this photo.
Posted by Pete Leary at 6:13 PM 5 comments:

For those of you who were wondering, Wisdom is back again this year and has laid another egg.  If you are new to the blog, Wisdom is the oldest known wild bird.  She is at least 62 years old.  We know she is at least that old because she was banded as an adult on a nest in 1956, and albatross are at least 5 years old when they mate.  I noticed that I never did mention that her chick fledged last season.  We are assuming that it did, since we had no evidence to the contrary.  Here are a few links with more of my photos, and a video that I got of Wisdom laying the egg.
http://usfwspacific.tumblr.com/post/69106441224/wisdom-the-laysan-albatross-returned-to-midway
http://usfwspacific.tumblr.com/post/37132842813/sharing-wisdom-worlds-oldest-banded-bird-teaches-us
http://www.flickr.com/photos/usfwspacific/sets/72157632891366006/with/11214517633/ 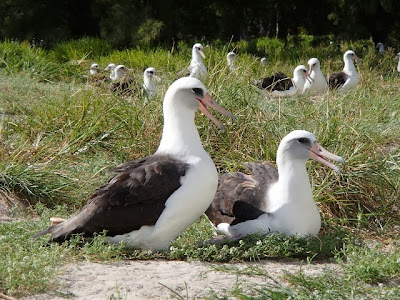 Wisdom (on the left) is sitting with her mate. 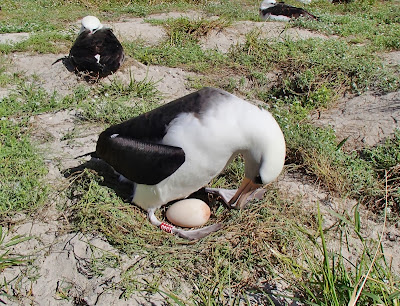 This is Wisdom a few minutes after she laid her egg. 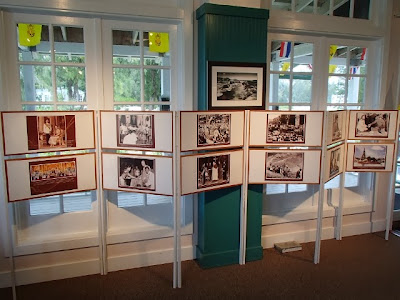 There were photos and information about the Thai king posted in the Clipper House for the week. 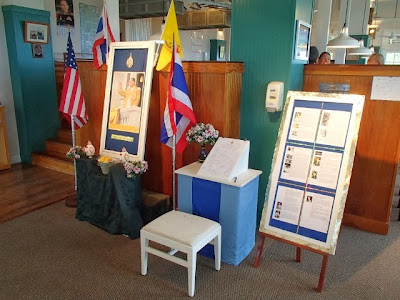 There was also a birthday card for people on island to sign. 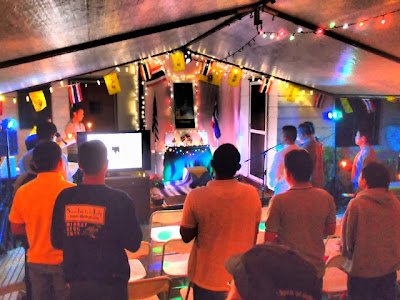 The actual birthday celebration was a good time with a lot of Thai food. 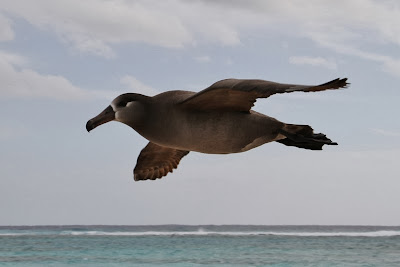 I haven't shown many Black-footed albatross lately, so here's one.
Posted by Pete Leary at 6:15 PM 2 comments:

A lot of food!

I hope everyone had a great long weekend.  We had a great Thanksgiving dinner.  The cooks did a wonderful job cooking turkey, ham, steaks, all the usual side dishes, and more.  I just finished up my leftovers today.

We're keeping busy monitoring the albatross plots.  It's about the peak of egg laying this week.  We also have to put bands on any new nesting birds in the plots so we can keep track of which parent is on the nest.  Luckily, most of them have bands on them already since we've been monitoring these areas for a few years and the birds nest in almost the same spot each year. 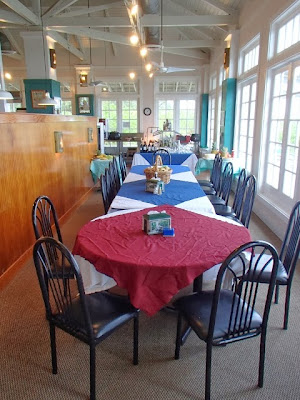 As usual, the tables at the Clipper House were all put together for the holiday meal. 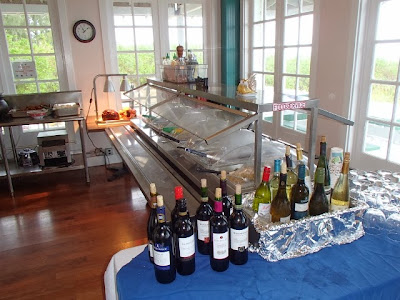 Wine isn't normally allowed at meals in the Clipper House, but they make holiday exceptions. 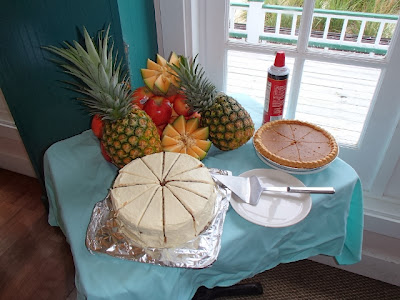 The pumpkin pie and carrot cake was good. 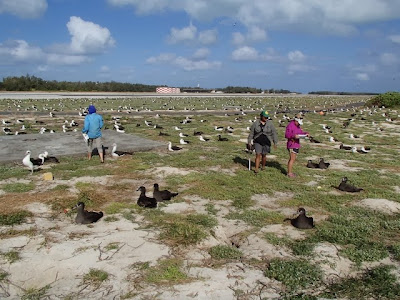 The volunteers check for new eggs in the Black-footed albatross plot near the end of the runway. 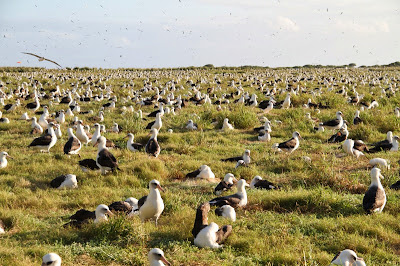 This is what the parade field looks like this week. 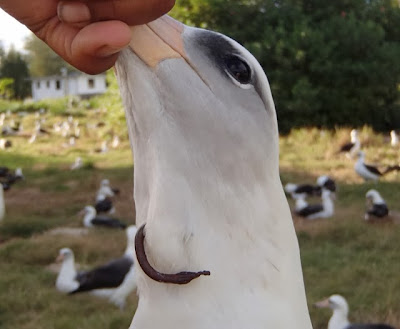 This albatross has a rusty fish hook in its neck.  We caught it to try to remove it, but it's been in so long that it has healed into the skin.  I'm sure the hook was nice stainless steel when it went in and it will probably be worse for the bird to take it out since the bird looks very healthy.
Posted by Pete Leary at 7:58 PM 3 comments: