No Tsunami & Albatrosses are Back

You may have heard that there was a couple of big earthquakes off the coast of British Columbia, and that there was a major evacuation in Hawaii for a possible tsunami.  We got the word out here too, so it was an evening of ﻿moving heavy equipment to high ground and waiting on the 3rd floor of Charlie Barracks.  We had the news playing on TV, and were watching our tide gauge data online.  We don't have direct access, so we just had to watch it on the NOAA website.  We got the all clear about 12:30 pm and all got to go home.  As you can see by the screen capture below, we really didn't get much.  I checked a few of the beaches today, and there was no sign of anything out of the ordinary, which was alright with me. 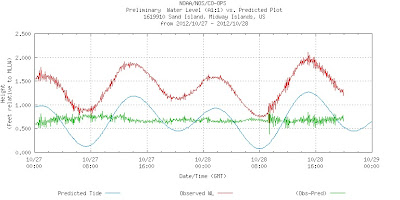 Here is the data from the tide station, taken from NOAA's web page:
http://tidesandcurrents.noaa.gov/data_menu.shtml?stn=1619910 Sand Island, Midway Islands, USA&type=Tide Data
You can see the variation after 08:00 on the chart.  You can click on it and make it bigger. 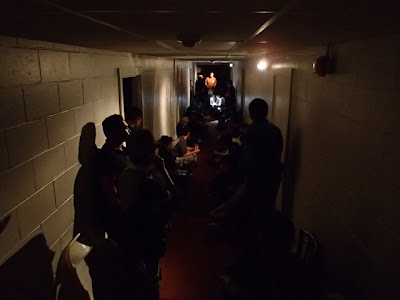 The island population waited in the hallway and rooms of Charlie Barracks.  The emergency lights were only on shortly while the generators were swapped.  We had power for most of the wait. 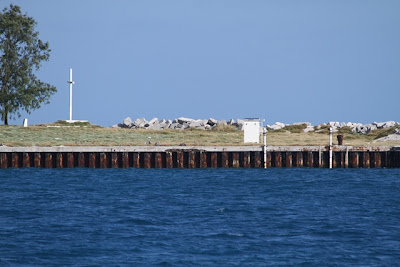 This is the NOAA tide station out at the end of the harbor.  It's just the 2 white tubes and the little shed. 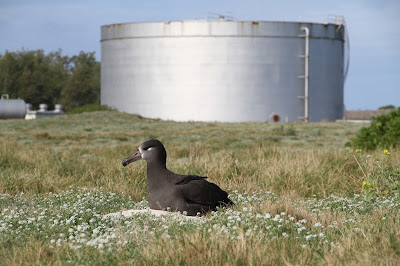 I forgot to mention last week that the Black-footed albatrosses started coming back.  There aren't too many of them around yet, but there will be soon.  The Laysan albatross have not returned yet. 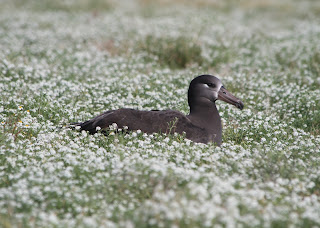 No special story with this photo, I just liked the bird in the Sweet Alyssum. 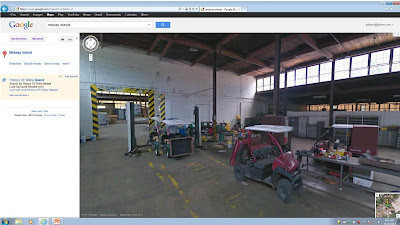 Here's a screen capture from Google Maps.  As I mentioned last week, you can go in the garage at the office.  You can also go into the Transportation building.  It's cool to play around with if you have the bandwidth, which I really don't.  You can make this photo a bit bigger by clicking on it, or just look at Google Maps.
Posted by Pete Leary at 4:35 PM No comments:

To all friends, family, aquaintences, and anyone just interested in Midway, we're all fine here.  Our tide gage only showed a rise of inches.  We'll check in the morning to make sure nothing actually happened.  We just had a nice wait up on the 3rd floor of Charlie Barracks.  I'll do a real blog post later, because it's 1 am here and the internet is really slow with everyone trying to contact their families.
Posted by Pete Leary at 12:49 AM No comments:

Sorry I'm a day late, but I really didn't have a whole lot to tell you about.  I've just been busy working and not taking many photos.

Last night I heard that ﻿"Street View" is now available on Google Maps for Midway.  It doesn't look like they have Eastern or Spit Islands on yet, but you can even go into the garage at the office. I searched for "Midway Atoll" and "Midway Islands" and it got to the right place, but "Midway Island" brought me to Virginia.  So for the comment last week about more photos of buildings and housing, you can now take a virtual tour of Midway. 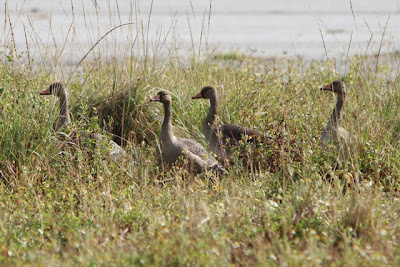 Nine Greater white-fronted geese flew in this week (only 4 in this photo so don't take too much time trying to count all 9). They are all juveniles.  The last one we had was in 2007 on Eastern Island, which you can see a photo of if you go back to Dec. of 2007 on my blog. 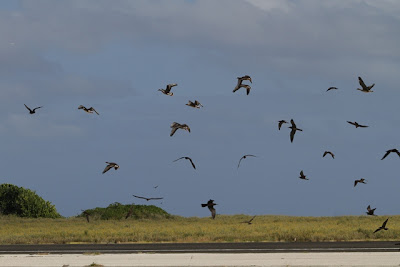 The Brown noddies don't like the geese and swarm around them when they fly. 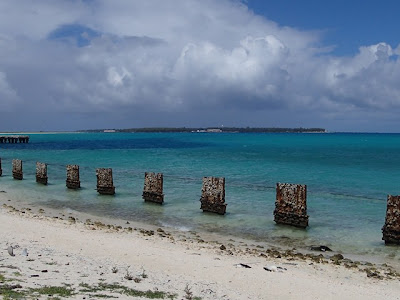 ﻿Here's a view of Sand Island from Eastern Island.  I don't have a lot of photos this time, so you can have some time to poke around on Google Maps.

The Kahana was back through this week dropping off supplies and bringing people to Kure, Laysan, and French Frigate Shoals.  They had some big waves at Laysan so couldn't actually drop anyone or anything off, so they'll have to swap crews and get supplies onto the island on the way back down the chain.  All of these island crews will be on their respective islands until March or so. 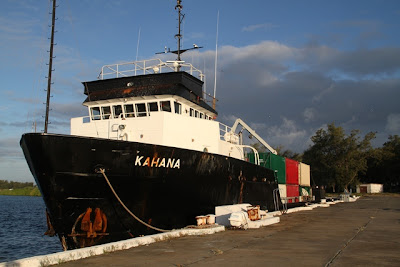 The Kahana is parked at the tug pier at Midway. 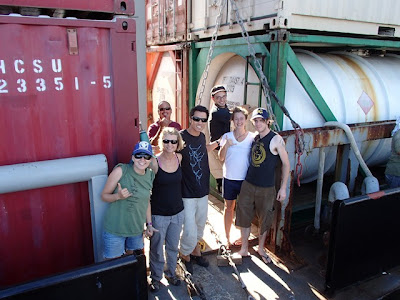 Here's the crew going out to Kure.  The returning people will be here until Thursday, when they'll fly out.  Except the guy in the maroon shirt.  That's Jim and he's Kahana crew. 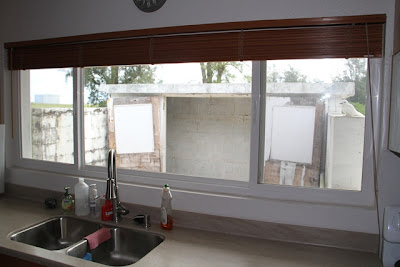 This has been the view out my back window since I moved in. 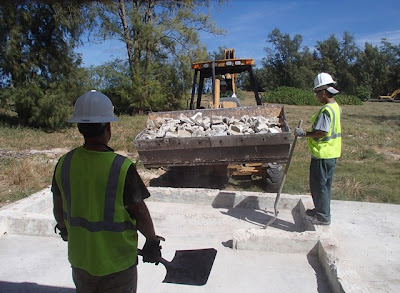 The contractors took out that shed that was pretty useless anyway. 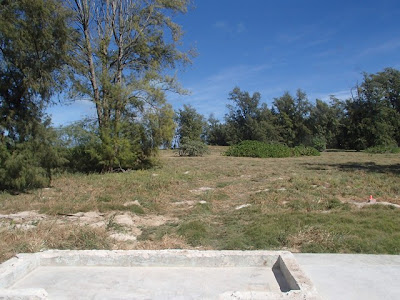 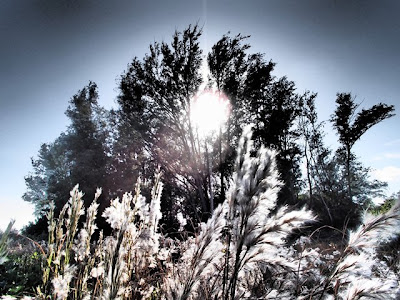 My little Olympus camera has some interesting effects settings.  This is the sun going down behind some ironwood trees with invasive bush beardgrass in the foreground.  Most of my different than usual photos lately have been with this camera.
Posted by Pete Leary at 12:06 PM 2 comments:

It's a bit busier around here without volunteers.  It has also been a bit quieter since our island population dropped a bit with the departure of our work crews. ﻿There's actually not much to talk about this week.  No medevacs, no emergency landings, no wildlife trouble, nice weather.  I even waited an extra day to post my blog in case something came up.  Nothing did, so here are some pictures. 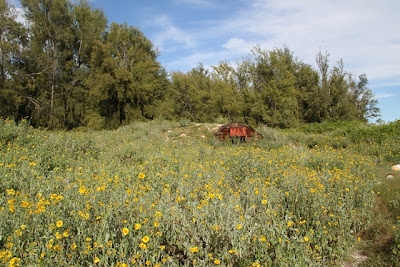 You can barely see one of the old bunkers behind all of the verbesina. 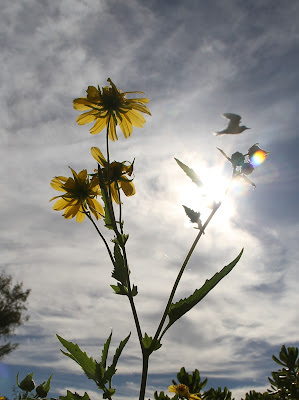 Too bad the verbesina is so invasive.  It would be kind of pretty if it didn't spread so much. 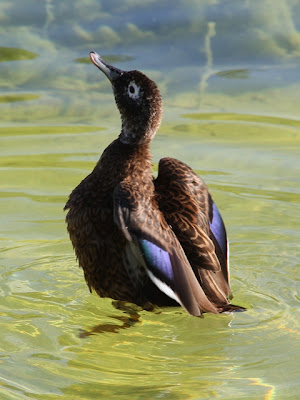 A Laysan duck gets ﻿ready to flap its wings. 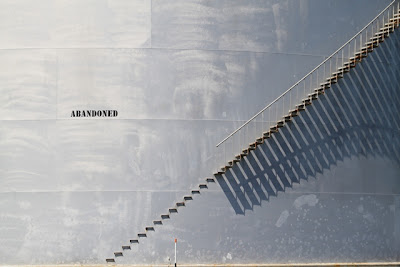 This is an abandoned fuel tank at our old fuel farm.  Our tanks there have been empty for years, but we haven't had the funds to remove them yet. 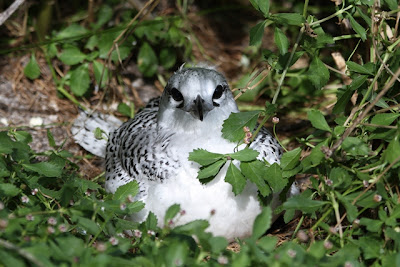 This Red-tailed tropicbird chick should be ready to fly out of here any day now. 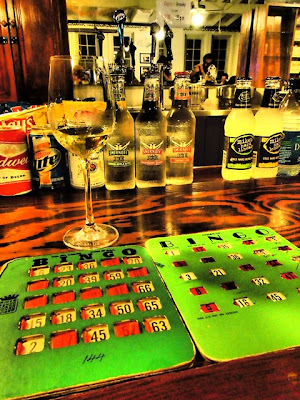 We had Bingo up at Captain Brooks on Saturday night.  I won one game.  The one where the person who doesn't get any numbers wins.
Posted by Pete Leary at 4:17 PM 3 comments: