I got over to Eastern Island and checked on the short-tailed albatross chick this week.﻿  It still looks like it's doing alright.  It will have to be banded soon.  We don't want to lose track of that one.  The weather is getting warmer so more of the other albatross chicks are starting to die from starvation or dehydration.  I still haven't got any Laysan duckling photos, as I said before though, I like to leave them alone.  There isn't much big news out here again this week, but it is the last week for this group of volunteers.  We'll be getting a new trio of volunteers on the Thursday flight.  That is also the flight that I'm leaving on.  I'll be heading back to Alexandria, VA to visit Dasha (my wife), but I'll do one more blog from there next week most likely.  I'm not sure if anyone on island will be doing any type of blog for you to get your Midway info.  Every once in a while a volunteer will start one.  I'll let you know if anyone does. 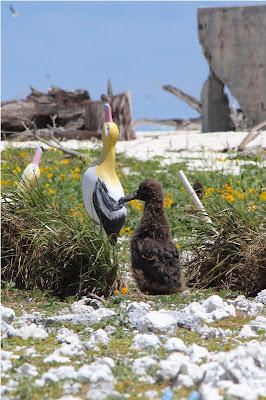 This is the latest photo of the short-tailed albatross chick on Eastern Island. 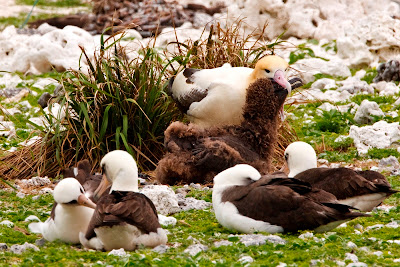 This photo was taken a few weeks ago by Joe Van Os.  He led a couple of groups for Joseph Van Os Photo Safaris.  If you'd like to read his trip report or see a slideshow of some of his photos, you can check out: http://www.photosafaris.com/blog/2011/midway-atoll-2011-trip-report-by-joe-van-os/ 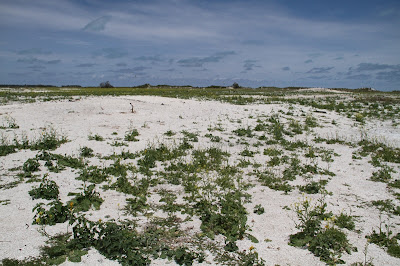 The vegetation is coming back on Eastern Island.  This was all bare sand a month ago.﻿ 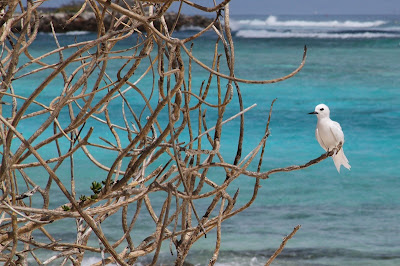 A white tern found a dead naupaka bush to rest on.  Well, I guess it's not quite dead because you can see a few leaves sprouting out of the branch.﻿ 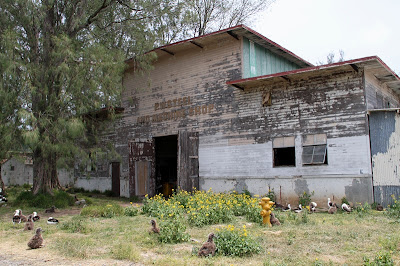 I'm showing a few more of the old buildings lately.  This is the old machine shop.﻿ 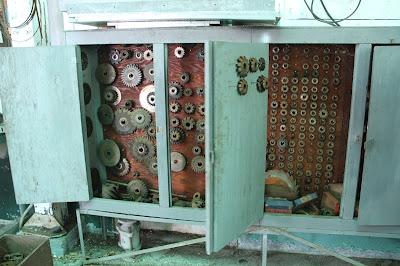 Here are a bunch of circular saw blades that I decided to try to get creative photos with. 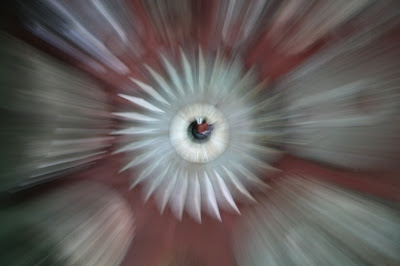 Here's one of the shots.  I zoomed in as I snapped this one.  I won't bore you with all 240 pictures I took of these sawblades. 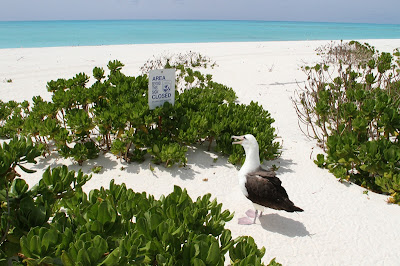 It looks like this albatross is contemplating whether or not this sign pertains to it.  It says "AREA BEYOND THIS SIGN CLOSED  All Public Entry Prohibited".
Posted by Pete Leary at 6:41 PM 4 comments:

This week was another beautiful and fairly quiet week.  No extra ships, boats, or planes.  We got the last seep cleaned out over on Eastern Island.  The volunteers banded﻿ the last of the Black-footed albatross chicks, but there are still a few small Laysan albatross chicks to band.  There are a couple of monk seal pups around.  I don't have any photos of them since I don't want to bother them.  It was nice on Tern Island when we had them right outside of our window.   The first Laysan ducklings were also seen walking around near the houses this week. So although there is a lot going on with all the birds nesting, there isn't a whole lot to report on this week.  Here are some pics. 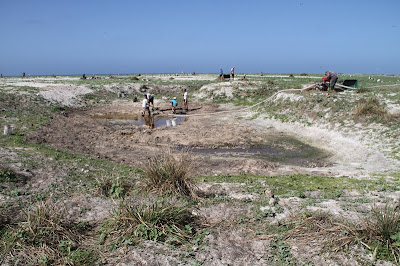 The mud at Sunset seep is cleaned out now.  The tsunami caused our freshwater to become salty enough to keep the fish that were washed into the seep alive.  We got some surprising fish out of this seep including a Hawaiian lionfish, threadfin butterflyfish, barred knifejaw, Hawaiian flagtails, yellowfin goatfish and a Steindachner's moray eel.  They were all returned to the ocean.  If you want to see what some of those fish look like, check out Keoki Stender's website: http://www.marinelifephotography.com/  He's got great photos. 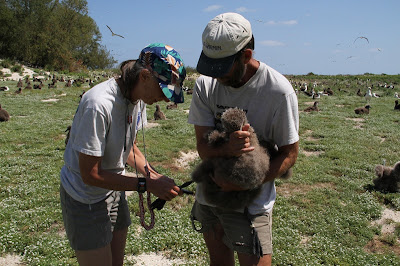 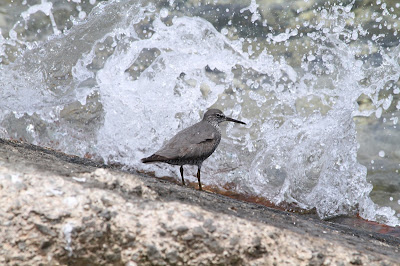 This wandering tattler is just about to get splashed. 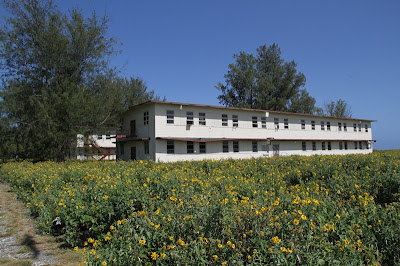 These are the old Marine Barracks near the airport.  They haven't been used for quite a few years, but at least they aren't falling in yet. 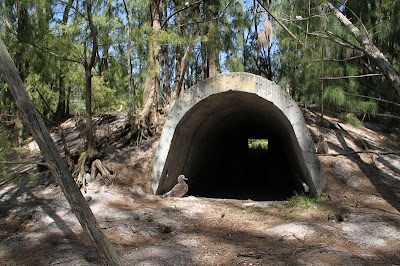 This is an old bunker behind the Marine barracks.  There are only two of this type of bunkers on the island.  There is a big room on each side of the middle of this tunnel. 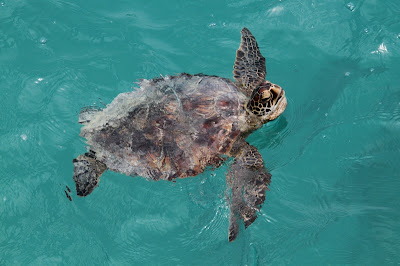 This green sea turtle was swimming by in the harbor.
Posted by Pete Leary at 3:47 PM 1 comment:

﻿It was a beautiful week.  Nice and sunny but cool.  This week we did a little extra duck work.  We are trying to get a good population estimate after the tsunami and botulism outbreaks, so we are looking at a lot of duck bands that can be fairly difficult to read. We also cleaned the second of the three seeps over on Eastern Island. Only one more seep to go.  The volunteers are just about done banding the albatross chicks too. 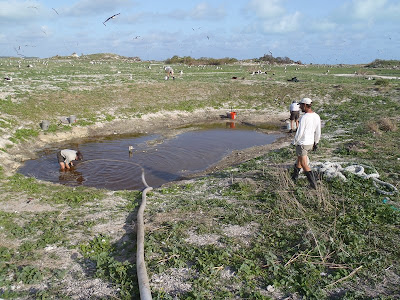 This is Rolondo seep.  We pumped out the water, then scooped out the muck in the bottom. 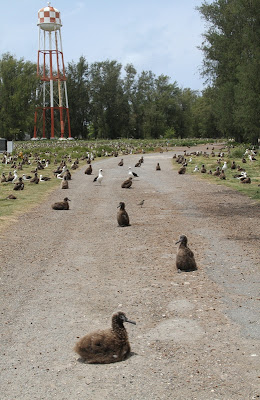 The chicks like to sit in the road.  You have to drive carefully because they won't move for vehicles. 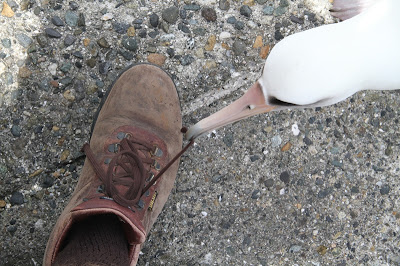 This albatross wanted my shoe untied for some reason. 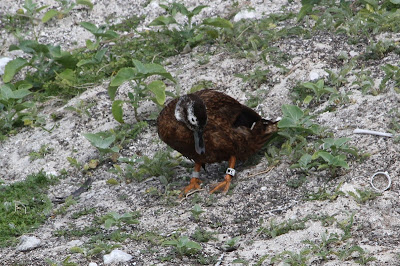 This duck has a pretty good band.  It says WE. This was one of the original ducks brought from Laysan. 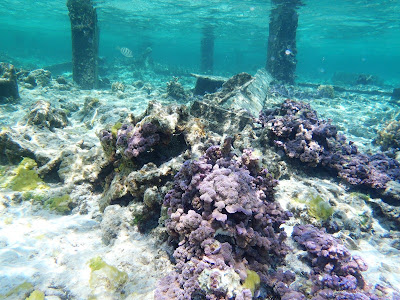 This is the snorkel spot we went to a week or so ago. It's called Reef Hotel.  There are a couple of deep cuts in the coral nearby where a lot of big fish hang out. 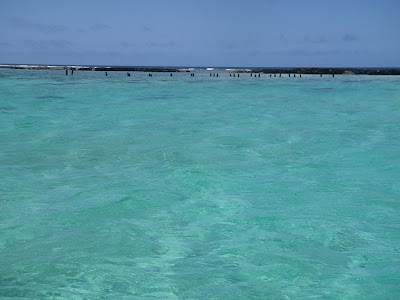 It doesn't look like much from above.  Reef Hotel was a spot where there was a pier with a little building.  It was used to perform drilling operations to find out how deep the original rock of the island is. 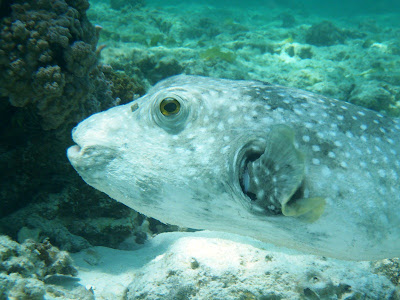 This is a stripebelly puffer that was at Reef Hotel. 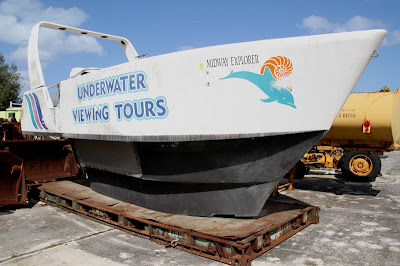 This boat was used for tours back when there was a major visitor program here.  It hasn't been used for years and is now in our boneyard with the other out of commission equipment. 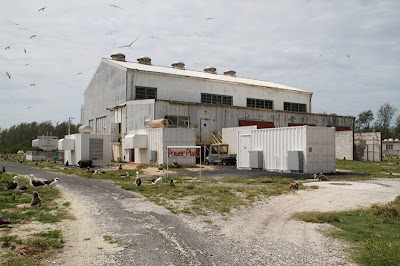 I'll try to show you more building pictures.  This is the power plant.  We don't use the generators that are in the building anymore.  They were too big for our island population.  The new ones are in the white storage containers that you see.
Posted by Pete Leary at 11:26 PM 1 comment: