There's a little less activity on island now that the taxiway crew is gone and the barge has departed.  Just in time, since the albatross started coming back this week.  There have been Black-footed albatross showing up all over the refuge.  Two Short-tailed albatrosses have also returned.   One on Sand and one on Eastern Island.  We've got some technicians from Seemore Wildlife here to get our remote camera working again to monitor the Short-tails on Eastern.  It's cooled down quite a bit in the last couple of weeks, so we are finally seeing less botulism in our Laysan ducks. 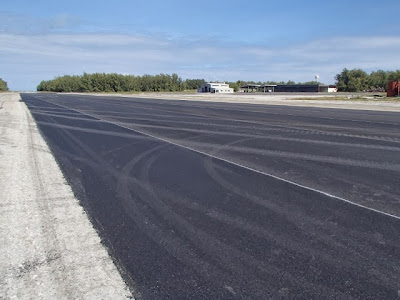 Our new airport taxiway is looking good.  The airplanes shouldn't have to drive through large puddles anymore. 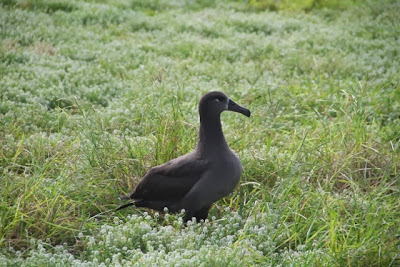 Here's one of the early Black-footed albatross on Sand Island. 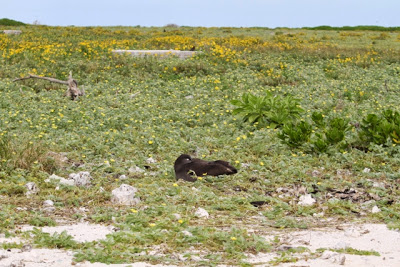 This Black-footed albatross is taking a nap while waiting for the rest of the birds to show up on Eastern Island. 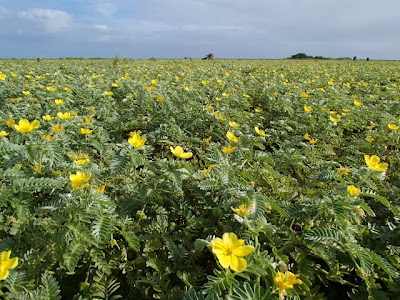 The native nohu, or Tribulus cistoides is ground cover for most of Eastern Island in areas cleared of verbesina. 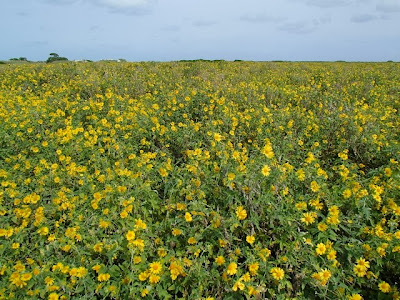 This looks very similar to the photo above of the nohu.  The difference is that this is the invasive verbesina that grows 3-6 ft tall and is poor nesting habitat for the seabirds.  The nohu is mostly less than a foot and the albatross can easily flatten it to nest.  We are hoping to have this area cleared in the next couple of weeks. 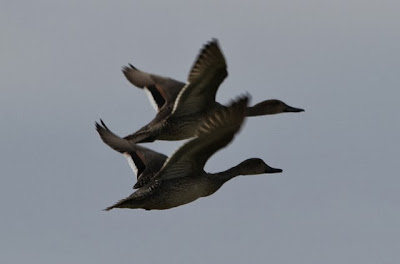 A lot of vagrant birds have been showing up lately.  Here are two of the 25 or so Northern pintails.  I haven't had a chance to count all of the vagrants yet, but there are also some Northern shovelers, American and Eurasian wigeons, and some sandpipers. 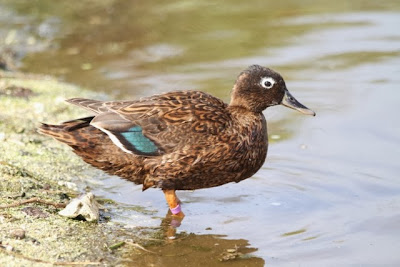 Yesterday I saw 4 Laysan ducks at the Monument seep on Eastern that had been sick with botulism and treated.  You can see that this one has a temporary lavender band on its right leg.  He would have died had we not found it and got the anti-toxin into him. 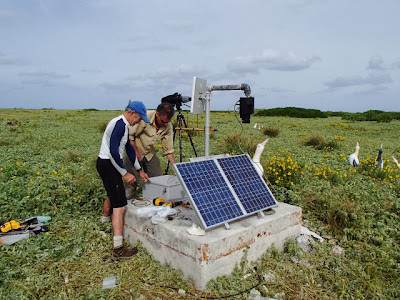 Dale and Konrad are fixing up the remote camera at the Short-tailed albatross plot on Eastern Island.  We'll be able to monitor the nest without bothering the birds.  You can see a few of the decoys in the background.  Konrad used to help us out on Tern Island with NOAA's remote turtle camera.
Posted by Pete Leary at 12:25 PM 3 comments:

I don't want to get political on this blog, since there are thousands of others where you can get opinions.  A few words from me probably won't change anyone's mind about anything anyway, but it's good that government employees are back to work.  Even though we were busy out here keeping things going with safety projects, we had no support out here for IT, admin, nor could we buy anything we needed.  So we're back to normal, or at least as normal as we can be with our reduced capacity.

The taxiway project is almost complete so the barge and all equipment will be out of here this week.  That will reduce our island population by about 30 workers.  The albatross will start showing up anytime now, so we're all glad that the birds won't be slowing down the work.

I didn't take a lot of photos this week so I've added a couple that I took a long time ago.  I just found them again when I was asked by a museum in Alaska for some photos of dead albatross with plastic in them. 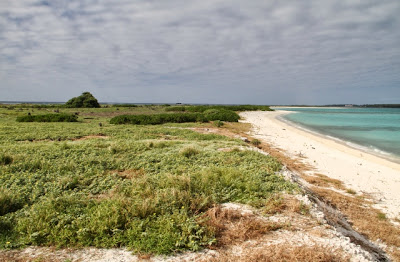 It was a nice day on Eastern Island today.  I didn't find any sick or dead ducks from botulism, and the view was great. 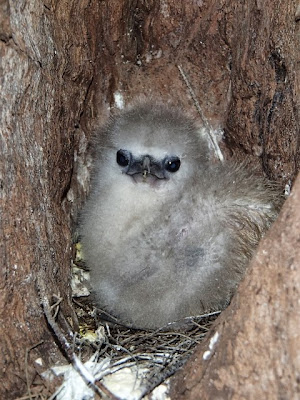 Here is the White-tailed tropicbird chick that I showed a couple of weeks ago.  It looks a lot better than when it just hatched. 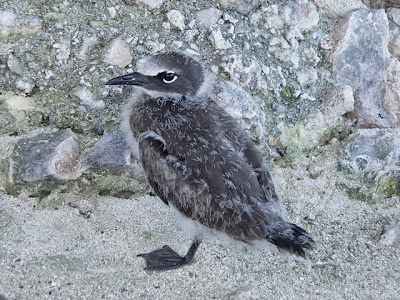 This Brown noddy chick is living under some solar panels on Eastern Island. 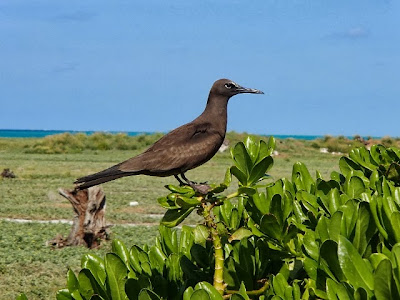 This is an older Brown noddy that probably hatched in July.  You can tell because it doesn't have the full white cap yet. 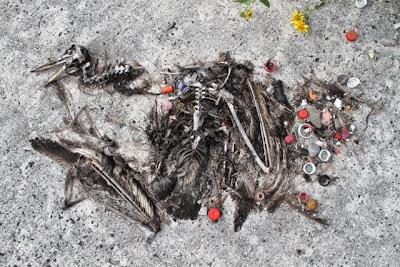 I don't think I've posted these photos before.  These are just a couple of examples of the thousands of dead chicks that we see each season with plastic in them.  By the way, both photos are exactly the way I came across the birds.  I didn't touch or add anything. 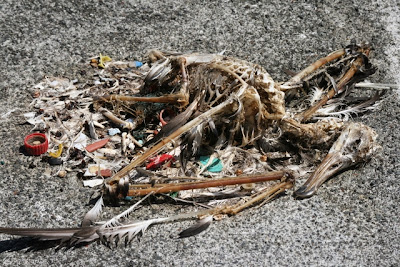 Since Chris Jordan's Midway movie trailer has been getting a lot of views, I've been asked many times if the problem is real and if the photos are manipulated.  Yes, the plastic is a problem, and no, the birds or plastic are not manipulated other than some photos may have had feathers or leaves moved out of the way to see the plastic inside.
Posted by Pete Leary at 8:46 PM 2 comments:

You're probably wondering how the government shutdown is affecting us out here.  Since this isn't an official USFWS blog and I do it on my own time, I won't go into it too much other than to say that we are officially shut down like all of the other refuges.  Since the visitor program and volunteer program were already suspended, at least we didn't have to send anyone home.  The three FWS employees on island are still working since we are responsible for the health and safety of the island population.  Our duties are somewhat limited at the moment though.  The taxiway work can still continue, since that was is a safety issue that started before the shutdown and we're still an emergency airport. 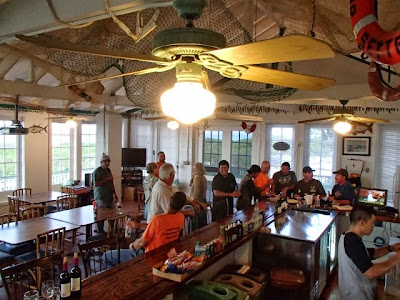 We had a small going away dinner at Captain Brooks' for the crews from Northwest Demolition and Iniki Enterprises.  They are done working for this season but will be back next year to continue to remediate the lead paint on the older buildings and help to keep our wildlife healthy out here. 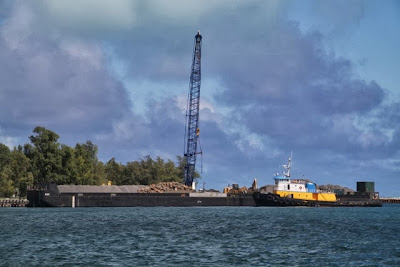 The barge is back again on Midway from a quick turnaround to Hawaii to pick up more materials for the taxiway upgrade. 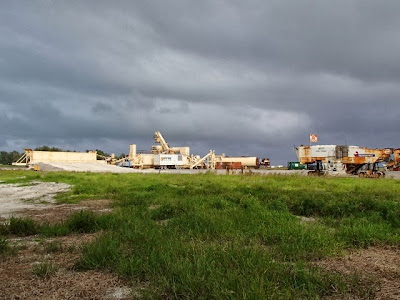 A batch plant has been set up on the abandoned taxiway for processing of the aggregate for resurfacing. 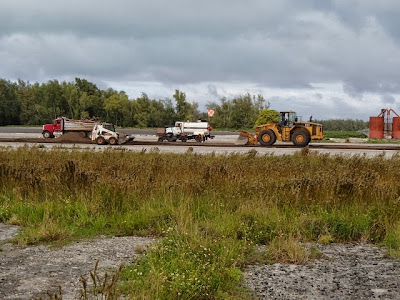 There is a lot more heavy equipment than ususal. 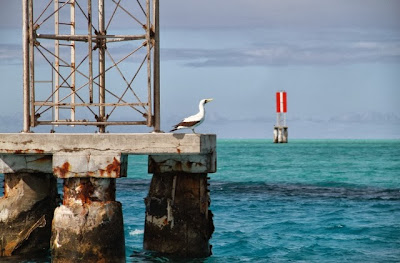 A Masked booby is sitting on one of the range markers in the lagoon. 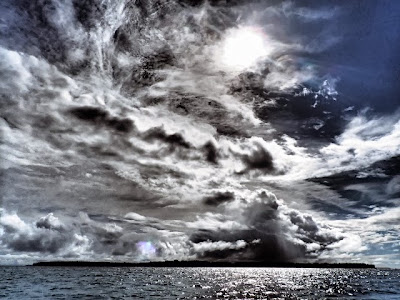 This is another photo of Sand Island with the "dramatic" setting on my Olympus camera.
Posted by Pete Leary at 8:57 PM 4 comments: