Wisdom, the oldest known wild bird, has returned.  Wisdom is a Laysan albatross who was banded while sitting on an egg on Dec. 10, 1956.  She was at least 5 years old at the time, so we say that she's at least 62.  She could be older, but that is the youngest that she would be.  A few days ago I came across Wisdom sitting on her egg, and while I was watching, her mate pushed her off the egg so he could take the first incubation shift.  She'll probably be gone for a few weeks.

I don't have any news on a Short-tailed albatross nest on Eastern Island yet.  I'll get over there this week and see if the pair has nested again. 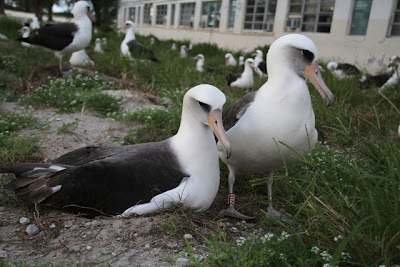 Wisdom's mate is sitting on the egg as she stands next to him.  She was gone the morning after I took this photo. 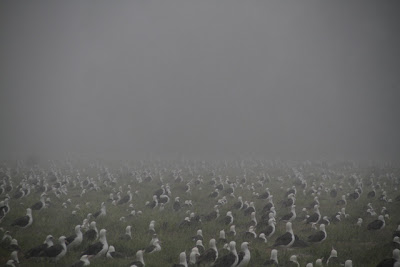 It's turning into winter around here.  The weather is cooling down and we're getting a lot of wind and rain.  This is the parade field on a rainy day last week. 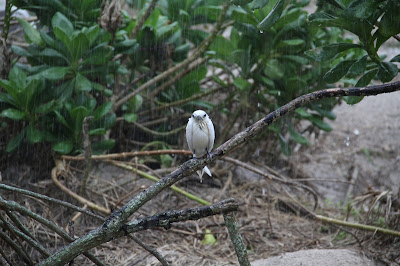 One of the White terns that we've been feeding  is getting soaked in the rain.  We're only feeding 3 terns now.  It's been a few months since they became homeless, and the last 3 should start finding their own fish sometime soon. 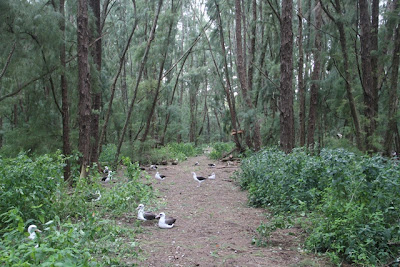 I haven't shown you a picture from the woods over on the west side of the island for a while.  The trail looks passable here, but as you get farther, more birds are nesting, and it's too difficult to get a cart through there. 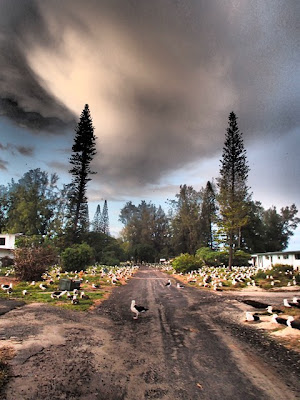 This is the street that goes past the Midway House and Charlie Barracks.  I took this with my little Olympus camera with the "Dramatic" setting. 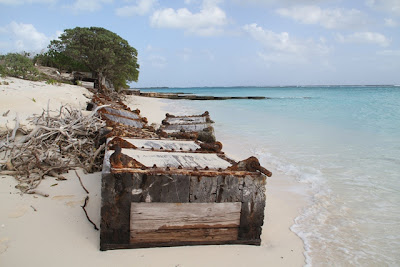 I checked the south beach for tsunami debris.  I didn't find any, but I took a photo of the old wooden floats that were used to float the anti-submarine nets that they had back in earlier military days.  These are now used to reduce shoreline erosion.
Posted by Pete Leary at 8:15 PM

That is delightful news about Wisdom. =) Thanks for the backstory & update.

I bought Darcy Pattison's book about Wisdom a few months ago. It is such a sweet and amazing story. Thank you for keeping a look out for her!