I got so busy packing and squaring things away that I didn't even realize I didn't do a post last week, so this week I've got a lot of pictures.  I usually like to keep it short and to the point, only because that's what I like to see and read, but there were quite a few things worth taking pictures of the past 2 weeks.

I don't have any information yet about anyone else starting a Midway blog, but I'll post something if I hear.  In the meantime, if you are on Facebook, you can keep up with things out here by liking the Friends of Midway (FOMA) page.  They frequently post updates and will keep you informed about this amazing place. 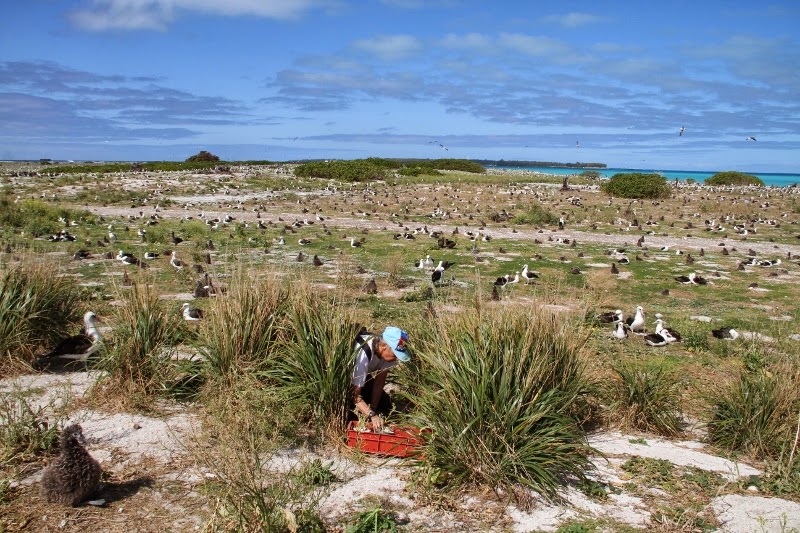 Penny is planting some native goosefoot (Chenopodium oahuense) on Eastern Island.  It grows pretty well when it's planted in the middle of the bunchgrass. 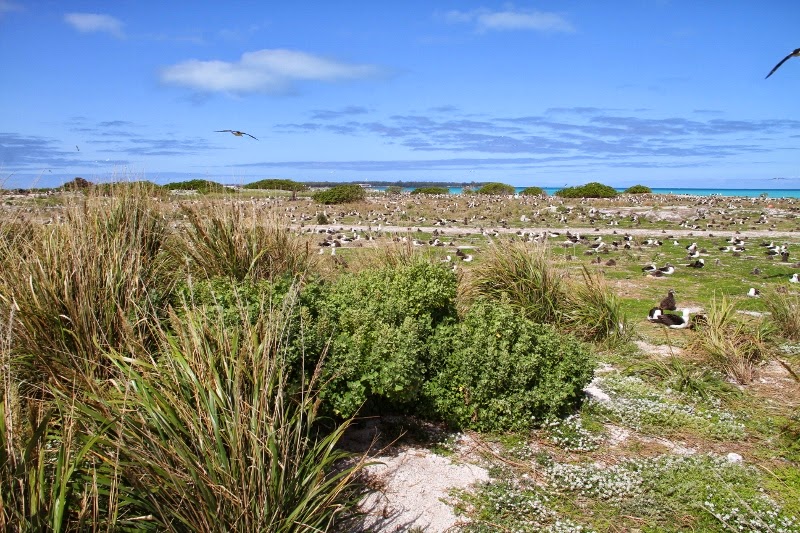 This is what the goosefoot should look like in a year or so.  It's good habitat for a lot of the birds and doesn't grow as thick as the invasive plants. 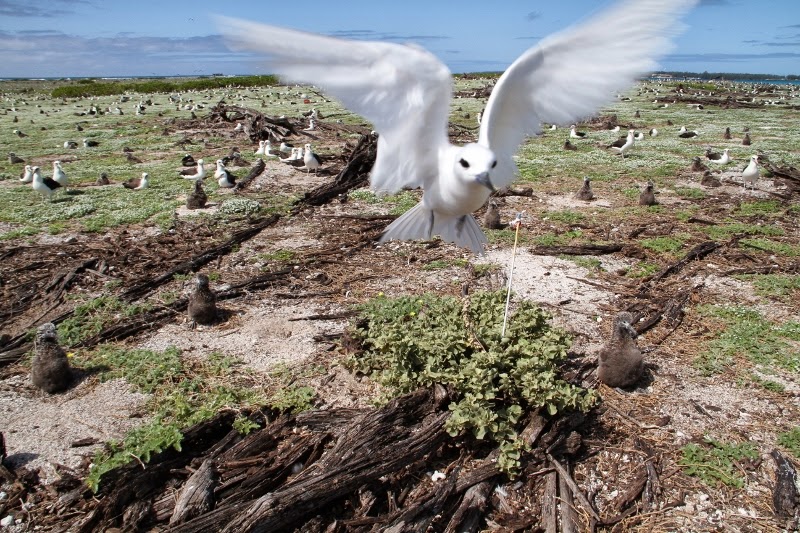 This is a photo of the one native popolo (Solanum nelsonii) plant on Eastern Island.  The White tern was checking my camera settings. 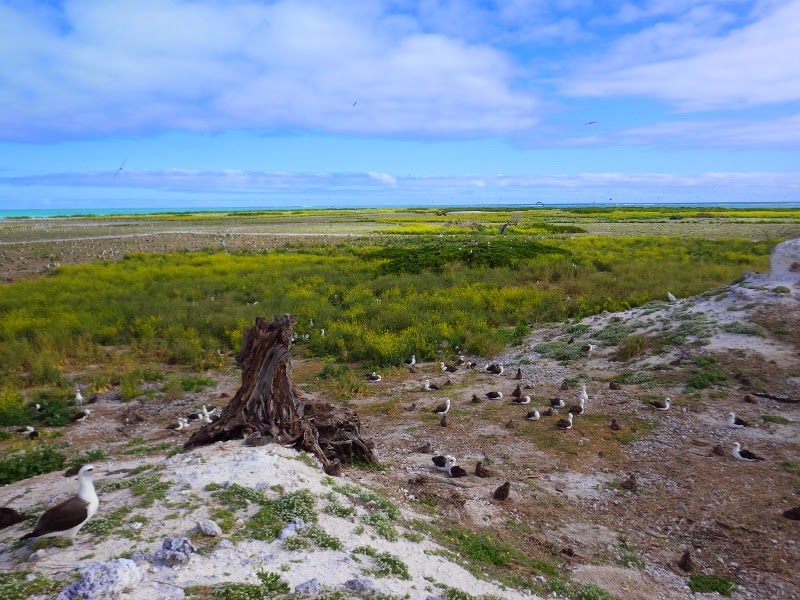 You can see the brown mustard (Brassica nigra) growing pretty thick.  We'll hopefully have that eradicated in a couple of years. 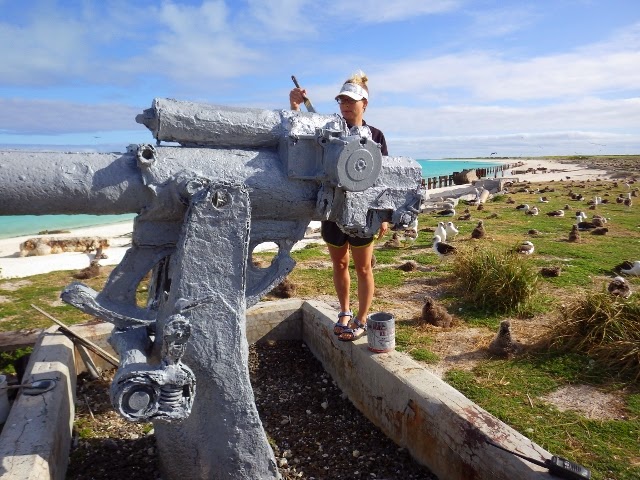 Here's another photo of Hope painting stuff.  This time it's the 3" gun on Eastern Island. 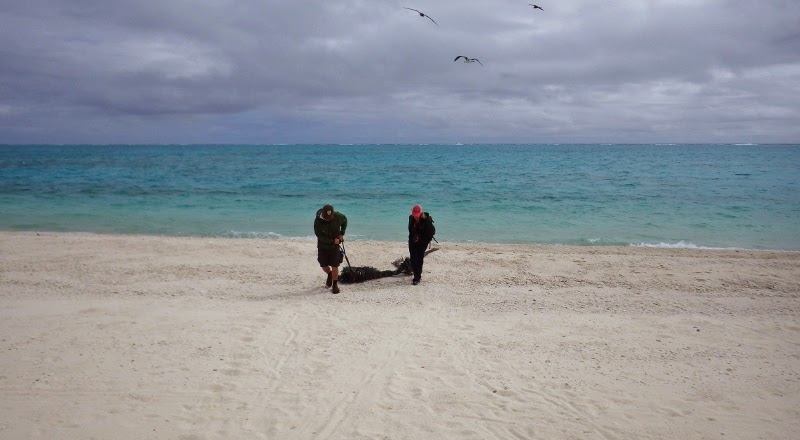 Bret and Denise are removing an entanglement hazard from the beach. 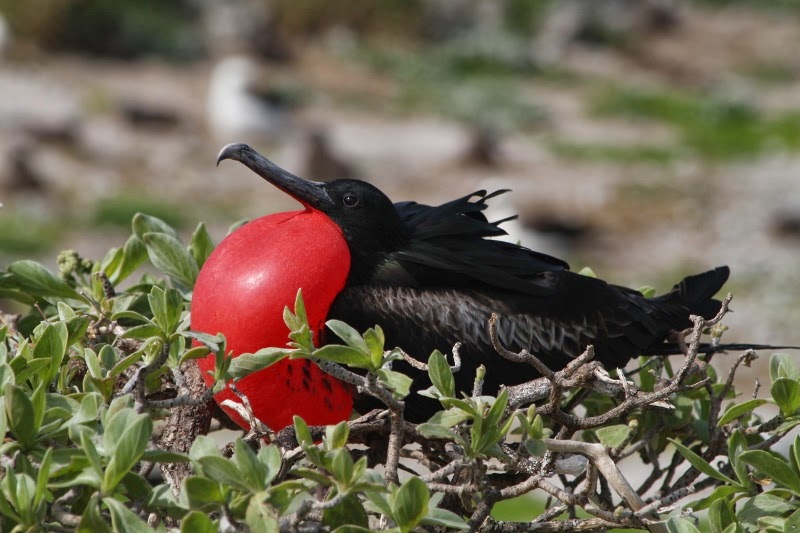 The Great frigatebirds are building their nests and looking for mates. 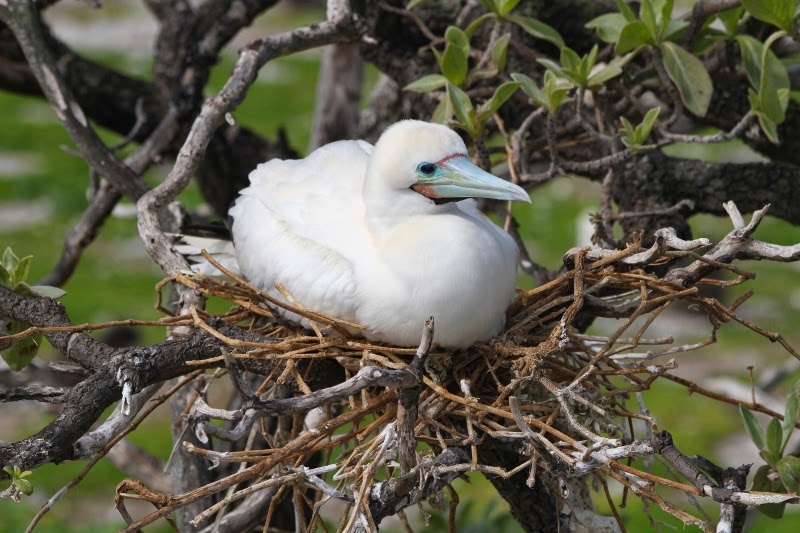 Same for the Red-footed boobies.  Both species should have eggs anytime now. 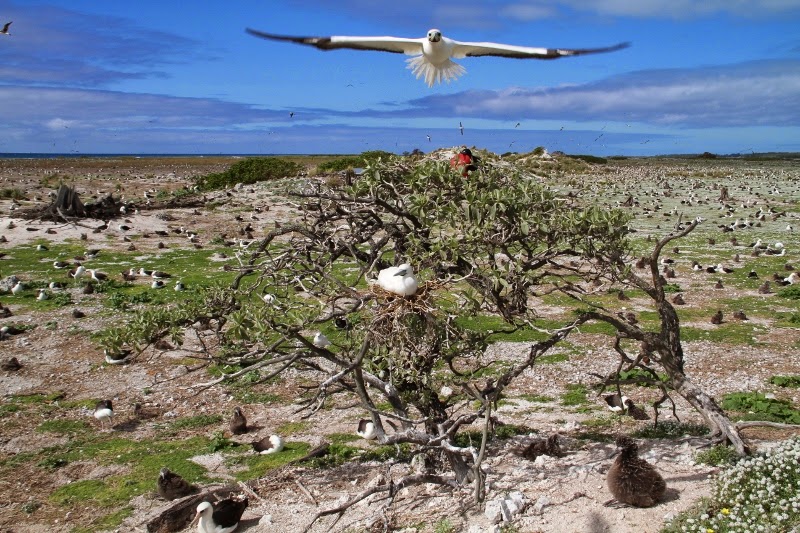 Here's the tree with the 2 birds above.  You can see a little White tern nesting in this tree too.  A lot of times you have 6 or 7 species or more nesting in or under 1 tree. 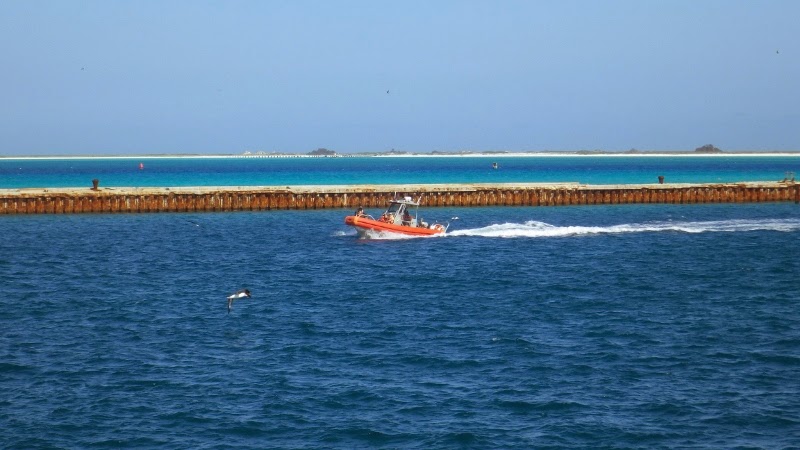 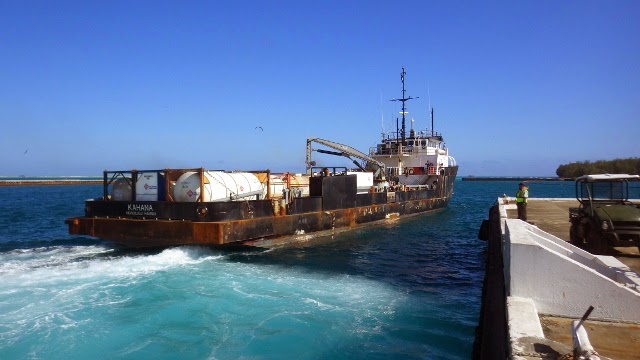 The Kahana brought us another 6 months of supplies.  They are swapping out the field crew on Kure Atoll this weekend and will be back on Monday. 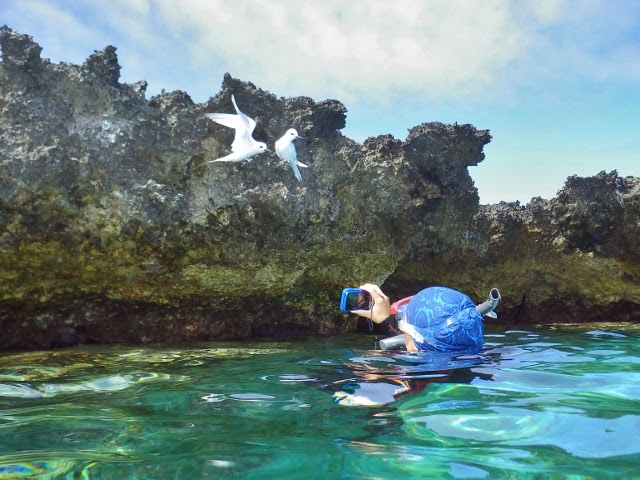 We took another trip out to the reef.  I hope these White terns don't lay their egg here because usually the reef chicks get washed away before they can fledge. 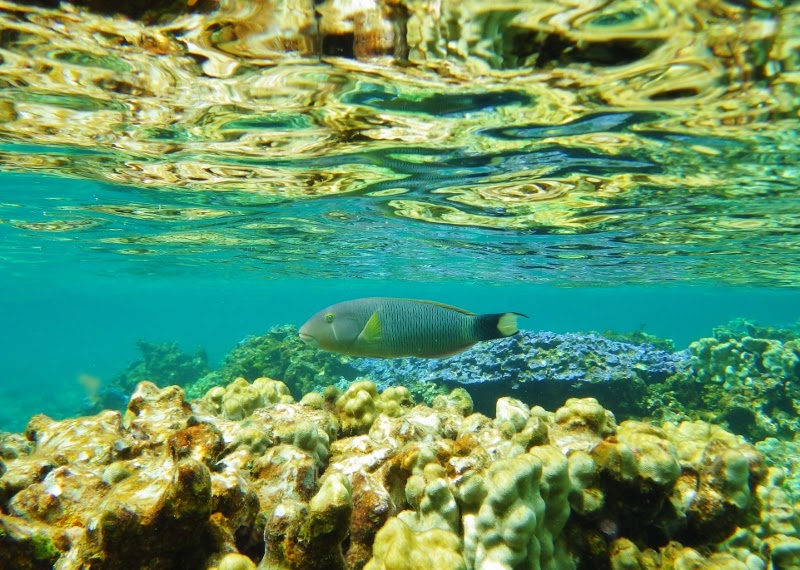 This is an old woman wrasse, or blacktail wrasse.  The emergent reef in the photo above this probably looked like this a hundred centuries or so ago, when that was actually submerged. 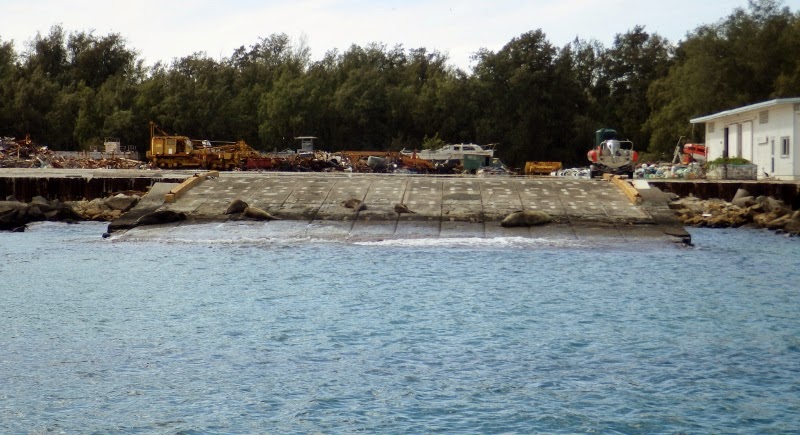 On our way back from the reef, we saw 6 Hawaiian monk seals hauled out on the boat ramp. 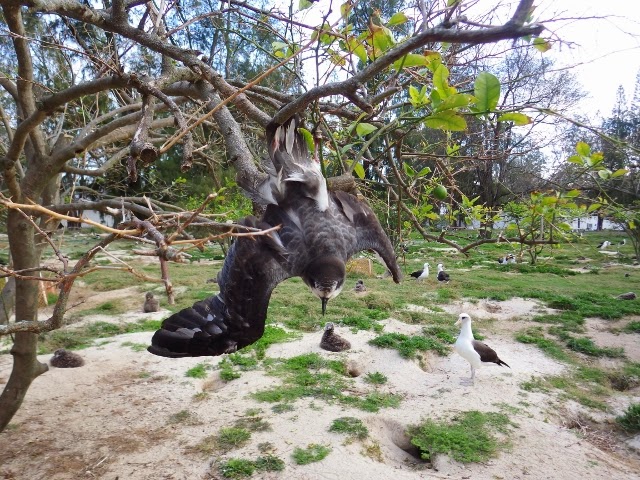 We had a bit of a problem with birds stuck in trees this week.  This Bonin petrel had its foot stuck in some branches and had to be rescued. 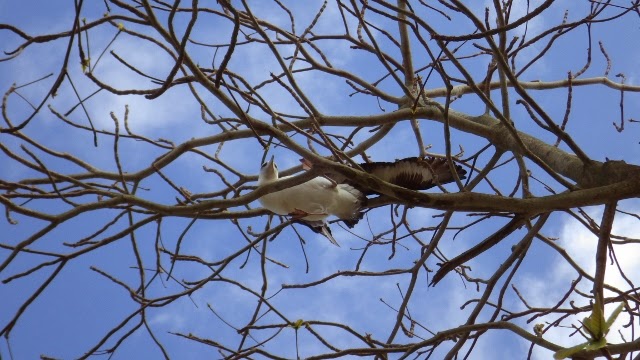 This Laysan albatross got really tangled up in this tree.  That's actually the bird's right wing all the way over on its left side.  It took a long ladder, a long stick, and a pole saw to get it unstuck.  It took a day or so, but the bird recovered. 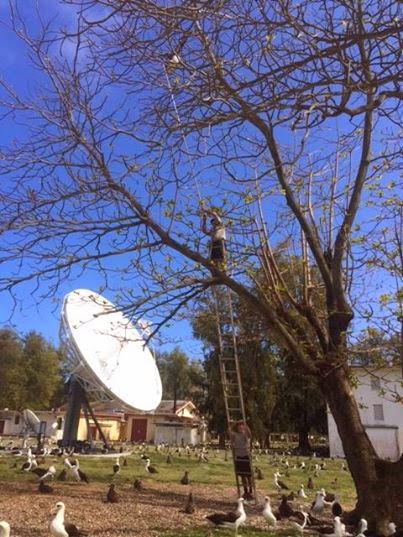 Here's a photo of Bret and I getting the bird free.  Cynthia Vanderlip happened by on her way back to the Kahana and took this photo.  I didn't have a chance to get it from her before she left so I grabbed it from the Kure Atoll Conservancy Facebook page.  They have some good posts about the Northwestern Hawaiian Islands so it's worth liking them. 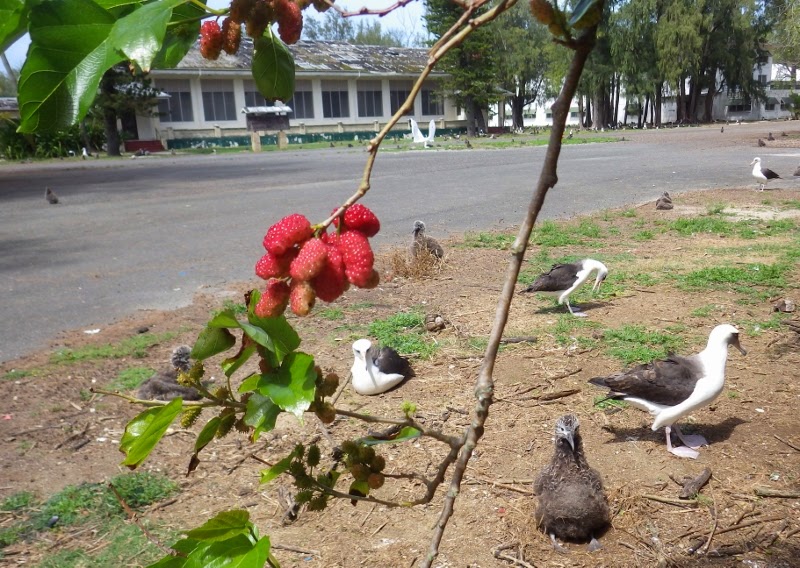 The mulberries across from the old galley are getting ripe. 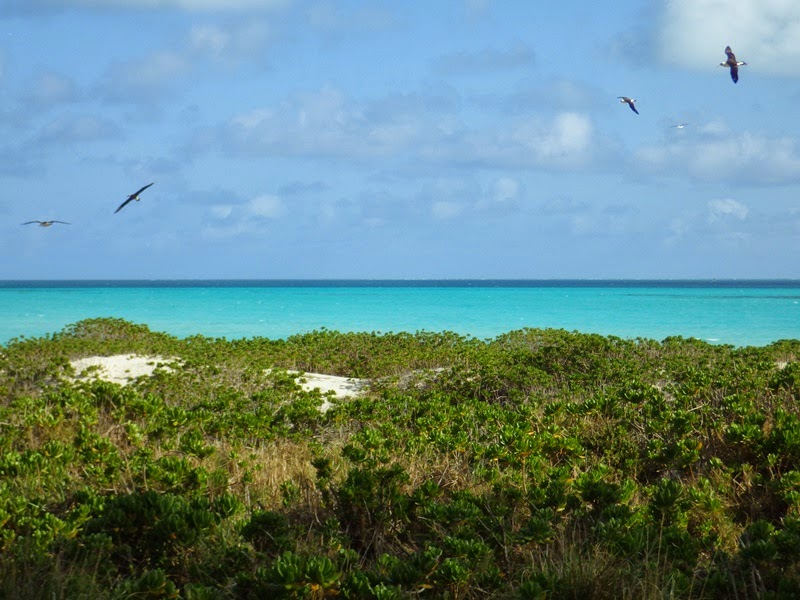 This is the view from the Clipper House (our dining hall).  I still am not tired of it even though I've seen it at least twice a day for all of the years I've been on island.

Pete,
It's been a wonderful five years, following your blogs on Midway and Tern. I cannot express my thanks enough for bringing the islands to life by sharing with us your wonderful photos, stories, and efforts there.

I wish you and your wife well and hope you two enjoy FINALLY living in the same home together.

Take care and thanks again!

Thanks for everything Pete! I never would have made it to Midway without coming across your blog. Good luck here on the mainland!

Pete, I have loved reading your blog, and will miss it terribly. Sure hope someone else will take up blogging from the Island. Best of luck in DC! Mahalo!

And thanks for helping with the educational outreach; remember all those Laysan Duck questions?!
aloha,
Barb

Bon voyage Pete! Thank you so much for posting every week and sharing so many amazing photos, and thanks for the opportunity to spend some time out there. I will be back, someday!

I have enjoyed your blog so much Pete and keeping up with Wisdom. Will miss your posts greatly.
I have a link to your blog on my blog
http://adeledawson.blogspot.com/ And hope lots of others are reading it too.
Thanks for the tip about Friends of Midway.
Good luck on your new ventures.
Adele

Hi Pete - I am a writer at the Cornell Lab of Ornithology and I'm hoping I can talk to you a little bit about Midway. I'm having a bit of trouble finding your email address, so if you see this comment would you mind dropping me a line at hdp8 at cornell dot edu ? Thanks much - Hugh

You can eat the brassica nigra--all the parts of it. Might as well use it if you're going to kill it.

What a beautiful pictures!
If you want to see more photos of birds, I share you my blog.